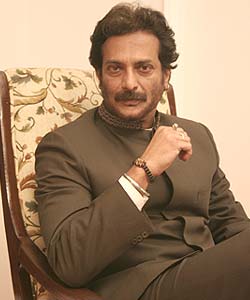 Contiloe Telefilms, which is even now reaping rewards from their just-ended successful historical show on Zee TV, Ek Veer Stree ki Kahaani Jhansi Ki Rani, have started plans for their next big historical. The initial shoot for their magnum opus show on Chatrapathi Shivaji has already begun, and this time it will be for Colors.

A little birdie tells us, "A huge set for the show is being built in Naigaon. However, the unit has already shot some outdoor schedules. The show is expected to launch around the Independence Day week, i.e. closer to August 15th".

On the cast, our source informs us, "Young lad Paras Arora who was earlier roped in to be part of Contiloe's Maharana Pratap on Star Plus will be playing the central role of Shivaji. Noted Bollywood actor Milind Gunaji will be essaying the role of the warrior Shahaje Raje".

When contacted, Milind Gunaji told us, "We are not supposed to talk about the show now".

We tried calling Producer Abhimanyu Singh, but he remained unavailable for comment.

Guess this is one big launch that awaits Colors..

Historylover 9 years ago Is it a right place 2 make a request for a show or a particular pair? I dont think any channel is going 2 come here and read all these posts...it would be better 2 contact them through mails
Since colors has been started 4 the first time...its going 2 make something different 4m its normal crap...but making a historical show is a huge responsibility...all shows have gud start but at last they end up by turning and twisting history...lets c what they are upto now

Savitha0101 9 years ago Historical Show??? Go ahead but along with that give us a new show with Sharad Kelkar and Supriya Kumari

coolgirl09 9 years ago we got a article on rajat tokas upcoming show dat too long bak but till now we dnt got any further information on it aftr dat article 2 shows are aired on colors n 2 articles of other shows but plzzz we want to abt rajat show...

Intrepida 9 years ago Sooo cool, cant wait, this way people will value history and want to safeguard our great history

HaHaHeHe-Hupp 9 years ago why u making such histroical shows ? u know i m completely fed up of listening their names and to watch them ,** door ki baat rahi**., plz try something different to give us , recently one show shobha somnath ki started , its not appealing to me..

zanraj 9 years ago colors what u think this show get success if u think u are wrong bec u are master of ruining the shows plz its good for u to bring back bairi piya show season 2 or similar the show with sharad and supriya.

RoseFairy 9 years ago wow another historical show and now its on chatrapati shivaji...its great waiting for it

Anurag Kashyap responds to MeToo allegations levelled by ...
20 minutes ago