View Profile
Playing with the sentiments and emotions of viewers is becoming the mantra of the reality shows these days and after watching this week’s shows the question that comes to mind is - Is it fair on the public, the participants’ or is it worth it at all? Featured Video
All the Pakistani contestants fell into the “Trishanku” this week in SRGMP, raising the issue of validity of fairness in voting. The hand of the rumor that had spread across the world via the media that these contestants refused to sing any Indian Patriotic songs maybe was the reason behind them getting low votes than they actually deserved. But what was humiliating here was how these contestants were made to stand in front of the viewers pleading their innocence giving an impression as if all three have been indicted in a major criminal offence. An episode which was supposed to mark the friendship between the two nations turned into a bitter one with all the three contestants and their fans hurt beyond belief. This whole explanation could have been easily cleared out behind the sets with the media, the same way that the false information was passed to them. Why make them face such humiliation in front of the world? Why play with the sentiments of the contestants, viewers just for the sake of TRP?
SVOI is facing a major problem in getting at the top of popularity charts. 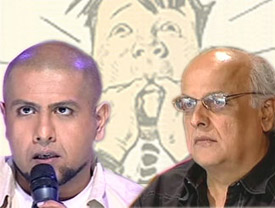 The basic thing that the show lacks currently is connectivity with the viewers and with even good contestants giving very inconsistent performances is making things worse for the show. Be it SRGMP or Indian Idol, both show a very friendly and easy camaraderie between the contestants, mentors, host and the audience present, which in turn is getting the viewers hooked to the shows, something that is lacking very much in SVOI. The judges instead of creating a friendly atmosphere or encouraging contestants of other gharana are always found to be going after each other’s throat. With Sonu Nigam as the special judge, Indian Idol saw all the contestants and judges having fun on the sets. SRGMP in turn saw ending the Saturday episode with an impromptu singing performance by all the mentors. These very small minor points are making these two shows close to the hearts of the viewers.
Forgetting the lyrics by the contestants during their performance has become a part of every show. This week Abhilasha in SVOI was not allowed to give another performance just because she forgot the lyrics and could not pick up the Antara while in SRGMP Shekhar took this issue and asked Raja not to write the lyrics in hand. But the question is - These contestants, who are being chosen as future playback singers, will be given the lyrics during the recording – then why cannot they have the lyrics with them while they give the performance? Disparity in 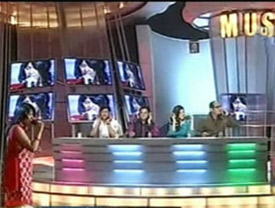 comments and rating by the judges has become a regular feature of these shows now. If in SRGMP Mauli did not deserve 10 from all mentors, then in Indian Idol too, Alisha’s comments for Chang and Ankita that they were flawless was quite unacceptable. Did Mahesh Bhatt come with some special tips from Vishal of SRGMP to the SVOI sets as he was found whistling on the performances through the show? But best was to see Himesh smiling throughout on the show. Seems Poonam’s wish last week to see him smiling has made this wonder of wonders possible.
It’s about time the reality show makers sit and chalk out their main objective in running the show. It’s about time they take a reality check and face the reality themselves to see in the loopholes which is bringing down the popularity and compromising on the objective of the shows and it’s about time talent is given prominence over dramas, and humiliating situations.
Author: Barnali
The Above views are views of the Author. you can PM Barnali for further details.

+ 3
14 years ago i wud like to say that all these reality shows nw a days r jus trying to make fool of the viewers.... they shud encourage budding talents by sayn gud encouraging words to them n not humiliate them... n even judges fight b/w them... which is very unbecoming of any judge... if u r gonna fight infront of ur so called disciples... u rnt fit to b thier judge /mentor... shows like saregamapa...meri awaz suno...,etc.. was awsome b4... they dint have all this drama... bt still were chart toppers... why cant anybody make realistic shows like that..were singing is the prime proposition n nt drama ??!!!!

14 years ago It was disgusting to see these three pakistani contestants in trishanku and above all making them standing for a long time in front of public and audience as if they made a crime . I was all the more surprised when ID asked aditya to change the system to perform/sing first and then show the result made me to think that some wrong think radically going to happen. but I did not expect this twist. The way these 3 contestant were asked question like court of enquiry to these boys was very disgusting. and above all questioning about their refusal to sing [for independence day special was all the more rediculous. How can anybody expect them or forcing them to sing indian patriotic song. on the contrary these contestant shd have been given permission voluntarily by zee tv team to sing their country's patriotic song as both countries celebrate independence day they are also entitled to remember their country as a good will gesture of indians as music has no mazab as long as they sing well and are talented. moreover junaid sang indian border film song [as it bears the meaning of a friendship and stop hatred ] but his performance was comemnted by kapil dev as this song has no josh.[kapildev is ignorant of the mood of the song] and the judges though they know it is an emotional song still they sided with kapildev and gave junaid 7 marks [by all the judges]] though raja sings well only khailash kher ,sukhwinder sing or arrehman these pakistani singers sang all varieties of songs sung by mohad rafi mukesh, popsong and classical songs. I wished they shd sing one famous pakistani song sayyonee. did any indian tried to sing that song . no never they can sing nor may not have been allowed to sing by the zee team. I wish they shd share each other's country's song and bind a ...

14 years ago You have correctly pointed out the issue of lyrics. This quality is not all required unless their aim is to produce only good stage performers.

14 years ago excellent article...i was so sad wen i saw this episode...was very unfair...glad these three were given a chance in srgmp

14 years ago I agree that this was totally insensitive on the TV station's part the way these three kids were treated like some crime was committed. There should be some ground rules for the realty shows and for the judges. Judges like Anu Malik and Farah Khan should not be on the judges bench as they are very rude and insensitive and humiliate the contestants. Judgment can be conveyed in a diplomatic way too without being sensational.

karanphadu 14 years ago if you come to think of it, writing lyrics on hand and forgeting many times is RAJA of SRGMP is in middle of times... then Aneek who could hardly speak Hindi sings flawless songs in multilanguages, including hindi, urdu, and sung punjabi recently.. he sang without the lyrics in hand or withought forgeting lyrics... shouldn't he be the role model for RAJA rather than other way around

14 years ago To be honest, this is all old news. Every year some or the other drama is manufactured on Indian Idol or SRGMP. I feel it is high time we realize that these are profit making shows, and as such they will do anything and everything to increase TRPs, as long as the censor board doesn't intervene!

14 years ago You are right on Hiral!! Tx for posting this article. Shame on Saregampa for humilating the Pakistani contestants. They are humble and nice people. Music should be a bridge to all cultures, walks of life, etc. It is a shame that politics blurred their vision. Hopefully they will learn from their mistake, and not have it happen again. Ana