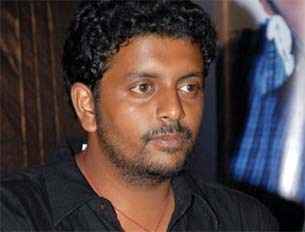 Director Sai Gokul Ramnath, who is awaiting the release of his Tamil family entertainer "Valeba Raja", feels that comedy films should cater to all types of audiences irrespective of demography.

"Comedy in our films is usually slapstick, targeted at a section of the audience, but it should ideally appeal to all audiences. If a family consists of four members...an 18-year old son, 24-year old daughter, father and mother, then comedy in films should entertain each one of them," Sai Gokul told IANS.

"'Valeba Raja' is a film for all audiences. I believe only when you're able to make everybody in a family laugh for a particular joke, you've made a successful comedy film. You can make an adult comedy entertainer, but it doesn't appeal to family audiences. In essence, comedy should cater to all audiences even in B and C centres," he added.

Gearing up for release in May, the film features Sethu, Vishaka Singh, Nushrat Bharucha and Santhanam in lead roles.

Sethu, who was last seen in a rural role in "Kannada Laddu Thinna Aasiya", underwent a makeover for "Valeba Raja".

"Unlike his last film where he was seen as a character from rural backdrop, Sethu plays an urban character in my film. I have portrayed him in a way that all the girls will like him. He underwent a makeover and had also shed about 10 kg for his role in a span of month and a half," Gokul said.

"We have also taken a lot of care about his looks in the film, his costumes and the colour of his outfits. Even for Vishaka and Nushrat, we were very particular about their costumes because we wanted it to reflect the urban flavour of the film," he added.

What is the secret to a successful comedy film?

"When you're making a comedy entertainer, you should welcome your actors to do what they want. You should extract the best from them by allowing them to internalize the story in such a way that it should also make them laugh," he said.

"But you should also know where to draw the boundary. You shouldn't let them do your work. But you should keep them in their comfort zone and that I think will be the biggest success of a comedy film," Gokul added.