This week, we put the charming Preity Zinta in the spotlight!

Born on the 31st of this very month of January in 1975, Zinta is a Hindu Rajput. She was born in Rohru in the district of Shimla, Himachal Pradesh. Her father, Durganand Zinta, was an Indian Army officer who passed 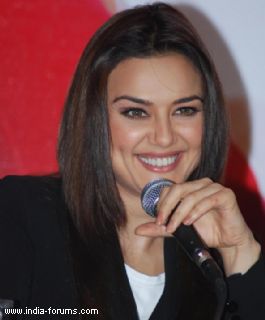 away in a car accident when the actress was just 13 years old. Preity is a middle child, with both an elder and younger brother.

Preity went to the Convent of Mary and Jesus boarding school in Shimla and graduated at the age of 18. She then enrolled at the St Bede's College in Shimla. From there, she graduated with a degree in English with Honours and continued on to a graduate program in Psychology. After earning a post-graduate degree in Criminal Psychology, Preity took up modeling.

Originally, Preity was to make her Bollywood debut through the film Tara Rum Pum opposite Hrithik Roshan, when director Shekhar Kapur suggested she become an actress in the year '97 during an audition. However, the movie was delayed and Kapur instead recommended her for the film Dil Se, which became her Bollywood debut.

Later on, she was seen in movies such as Soldier, Kya Kehna, Mission Kashmir, Chori Chori Chupke Chupke, The Hero: Love Story of a Spy, Koi... Mil Gaya and Kal Ho Naa Ho. In 2004, Zinta had a particularly successful year when she won critics' praises for films such as Lakshya and Veer Zaara. Also among her biggest hits are Salaam Namaste and Kabhi Alvida Naa Kehna. Other than Bollywood, Preity was seen in Telugu, Punjabi and English language movies as well.

Preity has been a victim of media scrutiny and a handful of controversies regarding her personal life. At first she dated model Marc Robinson, and then she was said to have started a relationship with businessman Ness Wadia which ended in 2009. In 2007, she was accused for having an affair with director Shekhar Kapur. The rumours were put to a rest upon Preity's public response to the issue, in which she asked Shekhar to step forward and clear her of the false accusations. At the moment, she is single and ready to mingle!

Her next movie, Ishqk In Paris is scheduled for release in 2012.

BollyCurry wishes the gal an early happy birthday and best of luck with her next film!

“I felt helpless & powerless”, says Preity Zinta as her mother, ...