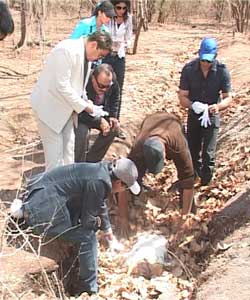 Sony TV's CID has always come up with innovative ideas when it comes to keeping the audience glued to their new cases.. The channel and Fireworks Productions have now planned to shoot a series of cases in three different cities of Maharashtra.

The CID team headed by ACP Pradhyuman (Shivaji Satam) have kick-started the shoot for this trail of cases.

Our source states, "The first city where the CID Team will solve two different and complicated cases will be the historical city of Pune. After this, the team will move towards Aurangabad to solve another tough case, and then to Kolhapur where two more cases will be taken care of. This series of stories will last for more than a month, and the team will be shooting at authentic places of the cities to give the story a realistic feel".

We hear that the team and the crew will be staying in each city for six days.

A source who accompanied the crew to the Pune shoot told us, "It so happened that the team could not start the shoot in Pune as the whole area was crowded with small children who had come to meet their favorites Daya (Dayanand Shetty) and Pradhyuman.

The series of episodes will start airing from 18th of March.

Well, it's a jackpot for those who reside in these places, as you can get a glimpse of your favorite action heroes in your own town...

looking forward to the series......& see the whole team in action

-Preeti- 9 years ago This show is good .... one which hasnt changed MUCH within yrs