As reported earlier by tellybuzz, that Salman Khan is soon to make an appearance in Colors' and Playtime Creations show Laagi Tujhse Lagan as Chulbul Pandey of Dabangg. 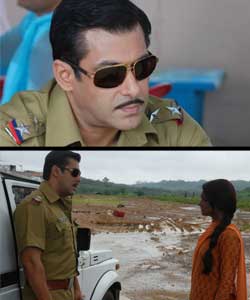 Though the male lead Dutta Bhau aka Mishal Raheja was refrained from the opportunity to share some screen space with Mr. Khan but the female protagonist Nakusha aka Mahhi Vij was on cloud nine firstly because Dutta Bhau has finally fallen in love with her and secondly the presence of ChulBul Pandey.

A Little Birdie informs us that, "Nakusha who currently finds herself in a helpless situation as she doesn't want to reveal her true identity to Dutta Bhau and amidst this Chulbul Pandey enters as a ray of hope in the life of Nakusha. When she is lost in her own pool of thoughts walking on a road unaware of the roaring traffic that is when Chulbul Pandey pulls her into the jeep in a hero style, saving her life. And then Mr. Pandey encourages her to face her fears bravely, not run from the situation and accept her relationship with Dutta Bhau."

Our source also adds that, "Salman Khan was called for a 3 hour's outdoor shoot but due to heavy rains the creatives wrapped the shoot in an hour's time."

And Salman Khans entry sequence will be aired today Monday, Sept 6 at 8.30 pm on Colors'.

Yuvika_15 9 years ago love u salman, i wish they had showed salman and mishal scenes too..bt lucky mahi who gt a chance 2 share space with salman, her fav actor

pls...more articles on ltl
so waiting for this track to start

fm05 10 years ago LTL's current track with the mystery of the MIW is awesome.

desisisters 10 years ago TB thank you for posting this article but can we please have more articles on TaSha and LTL please:)

nik_ita 10 years ago More articles on LTL and Mishal please!!!!

Urmila Matondkar Does Not Regret, But Ready to Apologise for ...
20 minutes ago

Shabana Azmi speaks about recovering from her Devastating ...
43 minutes ago

Who is AK in Sushant's Unseen Video that has Surfaced? Watch ...
47 minutes ago

Nishant Malkani: I may not agree with everything Kangana ...
5 hours ago
View More
TOP