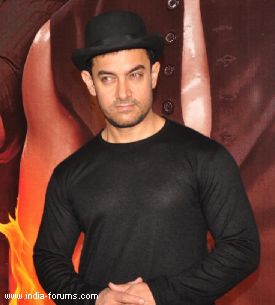 After rocking the box office last year with Christmas release "Dhoom 3", superstar Aamir Khan has once again locked the festive season for "P.K.". He confesses that X-Mas is "lucky" for him.

The actor previously tasted box office successes with "Taare Zameen Par", "Ghajini" and "3 Idiots" and interestingly, all of them came out during X-Mas.

If "Taare Zameen Par", the story of a dyslexic child, which was Aamir's directorial debut, came out on Dec 21 and earned Rs.37 crore, action-thriller "Ghajini" hit the screens Dec 25, 2008. A remake of Tamil film of the same name, it earned Rs.200 crore (approximately $41 million) in less than two weeks.

It was followed by "3 Idiots", which released in Dec 23, 2009. Loosely based on Chetan Bhagat's novel "Five Point Someone", it criticised the education system in India without being too preachy.

Keeping the past record in mind, one can say that X-mas could be lucky for "P.K.", which also features Anushka Sharma.