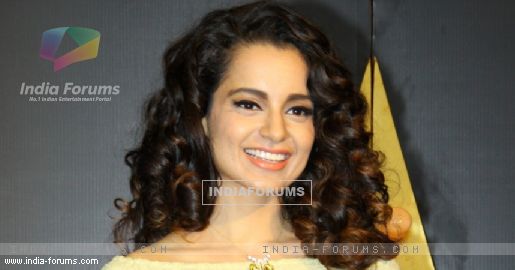 Kangana Ranaut's debut film "Gangster - A Love Story" won her multiple awards and made the audience, critics and filmmakers sit up and take notice of her talent. But getting the role in the Anurag Basu directorial only came after a bout of rejection, she has revealed.

Dismissing the rumour that Basu spotted her in a coffee shop and then offered her a role, she got talking about her past experience during a tete-a-tete with veteran actor Anupam Kher on Colors' "The Anupam Kher Show - Kucch Bhi Ho Sakta Hai".

While on the show, the beauty from Himachal Pradesh said: "I thought staying in Bombay (Mumbai) for a month and auditioning for movies would help. I was sitting with 10-15 girls for a shoot, when I met an agent who took me to Mahesh Bhatt's office. I met Mohit Suri and Anurag who saw my pictures. I then auditioned for a role.

"But Bhatt saab said, 'This girl is very young, barely 17-18 years. We need a mature lady atleast 28-29 years of age for his next film.' Then I heard they signed Shiney Ahuja and Chitrangada Singh for their next film.

"Suddenly one day after two months, Anurag called me desperately and said they needed to leave for an outdoor shoot immediately and are unable to get through Chitrangada. So Anurag said, 'Chalo chalo ab tumhara hi make-up karke thodi badi dikhayenge, tum hi kar lo film (Now we will do your make-up to make you look a bit mature, and now you only do the film'. That's how I got 'Gangster'"

In the 2006 film "Gangster - A Love Story", Kangana is seen as a bar girl who falls in love with two men - first a notorious gangster, essayed by Shiney, and later with a commoner, played by Emraan Hashmi.

The role opened several doors for the actress, who has, over the years, carved her own niche in the Hindi film industry with roles in films like "Woh Lamhe", "Life in a... Metro", "Fashion", "Tanu Weds Manu" and "Krrish 3". She raised the bar for actresses with her role in this year's "Queen", where her effortless portrayal as a simpleton who learns to live life independently, touched the audience's heart the right way.

Kangana will speak about her struggle - the ups and downs of her life - on "The Anupam Kher Show" Sunday.