Mumbai, April 24 (IANS) After having shot for Onir's 'Sorry Bhai' in Mauritius, Chitrangada Singh is back in Mumbai to work with none other than Aamir Khan in his hush-hush project 'Delhi Belly'.

All her fears about the comeback have vanished in less than three months.

'Right now all I can say is that I'm waiting for the script. I never expected such wonderful things to happen after my decision to return to films. The block about married actresses is more in the individual's mind,' Chitrangada told IANS.

After a stellar performance in 'Hazaaron Khwaishein Aisi' and 'Kal - Yesterday And Tomorrow', Chitrangada quit the film industry because she felt betrayed. But now she is back for good. 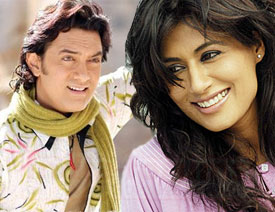 'Delhi Belly' is a Delhi-based sex comedy that will feature Aamir in a pivotal role. Director Abhinay Deol, who had earlier shot an ad with Chitrangda, had his heart set on casting her in his first feature film.

The Sudhir Mishra discovery is increasingly being seen as the new age Smita Patil.

'It's uncanny. But Sudhir would say so during the making of 'Hazaaron Khwaishein Aisi' and now during 'Sorry Bhai', Shabana Azmi kept saying the same. I believe Shabanaji and Smitaji were close friends. In a way, Shabanaji has been my only idol.

'When I set out to do my first film, my only reference was Shabanaji. To work with her so early in my career was a little daunting. She plays my prospective mother-in-law in 'Sorry Bhai' and I do have some important emotional scenes with her.

'Fortunately, she turned out to be very encouraging and nurturing. She brings out the best in you and raises your performing level without even making you realise she's doing it. She carries a scene beyond the written word.'

Chitrangada is enthused about her second innings.

'Now I'm more than ever sure that this is where I'm supposed to be. Acting is my calling. Of course, there's still a sense of insecurity. I'm sure even the most accomplished actors feel it. Fortunately, for me I've started well.

'It was a pleasure working with the 'Sorry Bhai' team. I went with some nervousness considering this was my first film in three years and I was going to be with them for 30 days in Mauritius. By the end, it felt like a family.'