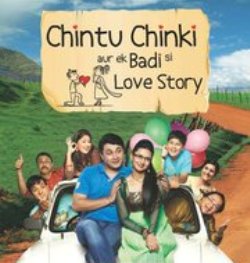 Rajesh Kumar's collaboration with Hats off Productions gave the viewers 'Chintu Chinky Aur Ek Badi Si Love Story' on SAB TV but seems like the show is now fighting its last battle as the channel has already given them an ultimatum to pull up its numbers which have not been so impressive since the show has started.

The show has performed below its generated expectations and hence the production house has brought in Chintu–Chinky's wedding track where they intend to have a celeb galore.

Our secret khabroo also revealed that Swapnil Joshi and VIP will be invited to perform in the ceremony; however, nothing has been confirmed yet.

Where actress Suchita confirmed her presence, Karishma Tanna says, "Yes, I will be performing on the sangeet on the track Say Na Say Na and I am excited for the same."

Hope the Chintu Chinky team succeeds in garnering good numbers with this big surprise which we just unveiled for our audience...

shashank.sriva 9 years ago Not @ all surprised..SAB TV has lost everything it used to have...They ruined all the better shows and dragged the unnecessary ones...BTW who is this sara????????????

+ 2
9 years ago No Use of all this!! Jus bring in a sensible track... coz witout dat evn SRK wont be able to help u guys, forget abt the names mentioned here :P

9 years ago will watch it for sara..she will surely rock

+ 2
9 years ago awww I Love Divyanka! Really miss her I don't have this channel but would surely watch it just for her:)

9 years ago now a days sara all the way. all the best sara. try to see this onlyy bcoz of you.

9 years ago i dont believe this

i recently started watching this show and i think it is a good show...
i m still watching the initial episodes and i seriously loved them
dont know wht is happening currently but this show should not shut shop so easily

i love kishen, navjivan chacha and dadiji and chintus dadaji

i seriously wud love to watch more of this show

i mean come on, when other boring shows can just go on and on...why cant a good, romance-cum-comedy stay on air!