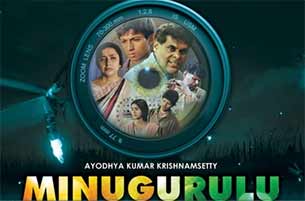 Upcoming Telugu drama "Minugurulu" will be screened at the ongoing International Children's Film Festival of India (ICFFI) here. Its director Ayodhya Kumar feels this opportunity will help the film create a buzz before its theatrical release.

A film featuring 40 visually impaired children, "Minugurulu" is the story of how these children expose the wrongdoings of the warden of an orphanage.

"I see this as a platform for my film to make maximum buzz before its theatrical release. Thousands of children will watch the film along with many youngsters and adults as well. I can only imagine the positive output out of this opportunity," Kumar told IANS.

"Minugurulu" was shortlisted out of 150 films to be screened at the festival and it will feature in the Competition Live Action category which has 16 more films. "Minugurulu" will be screened here Nov 18 and Nov 19.

"I'm hoping that by screening the movie at the festival, my film may find a distributor to support its nationwide release. I don't want to restrict the film to Andhra Pradesh because it deserves to cater to a large audience," he added.