After a short gap, BollyCurry is back with a brand new edition of Child Star in the Spotlight. This month we shine the spotlight on Parth Bhalerao. Bhalerao is best known for his role in Bhoothnath Returns (2014) alongside Bollywood's Shahenshah, Amitabh Bachchan.
Born on May 30th, 2000 in Pune, Maharashtra, this star 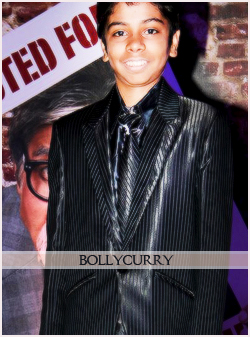 faced the camera for the first time in 2012 for the film Upside Down. After receiving a lot of love and appreciation from the audience, he was later signed to act in a Marathi film, Killa (2015). It premiered at the Berlin Film Festival in 2014, where the film went on to win the Crystal Bear (Best Feature Film) and a special mention in the KPlus Section. However, the film hasn't released on the big screen yet and is scheduled for a summer release later this year.
Bhalerao struck gold when he was selected to star in Nitesh Tiwari's Bhoothnath Returns, thus marking his debut into B-Town. The film has multiple established faces such as Amitabh Bachchan, Boman Irani, Usha Jadhav and Sanjay Mishra playing pivotal roles with well-known Bollywood personalities Shah Rukh Khan, Ranbir Kapoor, Anurag Kashyap and Yo Yo Honey Singh making cameo appearances in the film. Bhalerao wasn't the original choice for the role, but due to having experience in front of the camera and not being intimidated by Amitabh Bachchan's presence, he was signed without any further delay. To prepare for his role, Bhalerao underwent many workshops with the entire cast and was taken to Dharavi to observe the lifestyle of the people living there. This young star played the role of Akhrot, a boy from the from the slums that earned a living by showing tourists around. The film was promoted extensively, and he received widespread adulation for his character and his screen presence.
This talented young man has worked in other Marathi films as well over the last couple of years and even had a Marathi short film, Khalti Doka Varti Paay, screened at the Cannes Film Festival. All this appreciation has not deterred Bhalerao from his priorities, as he plans to continue his education and take up films whenever an interesting role passes his way.
Bhalerao is currently one of the most sought-after child stars in the industry and he is extremely loved by his viewers. With a variety of films in his kitty, we at BollyCurry are sure there are multiple opportunities for this young superstar to show off his talent. We wish him all the best for all his future projects. Be sure to give him your best wishes in the space below!
Writer: Nisha M.
Editor(s): Mohini N. & Gunia K.
Graphics: Shikha A.
Have a suggestion or comment for BollyCurry? Drop us a PM at BC_Dropbox Today!