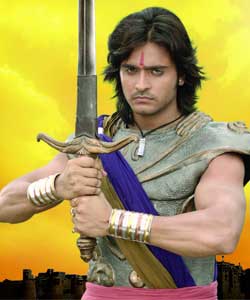 The diplomatic ruler and the master strategist in Chandragupta Maurya is born, as the Number 1 Imagine show is all set to enter the very interesting phase post the ten year leap.

With the introduction of Ashish Sharma as the grown up Chandragupta, the story line will focus on the intention of Chanakya (Manish Wadhwa) to weaken the Greek army by planting Chandragupta as part of their army.

The introductory sequence of Ashish we hear, has been shot in an extravagant manner in which Chandragupta is shown destroying the ammunitions of the Greek army. This is followed by a fight sequence wherein few soldiers in the Greek army realize that Chandragupta has joined their army to weaken it.

While the post leap story line will focus on the journey of Alexander's conquest over India, the pre leap portion of the story will end with an interesting sequence wherein the little boy Chandragupta tries to attack Dhananand (Sooraj Thapar). Viewers will also see the boy taking an oath before his master Chanakya that he will safeguard his mother land once he grows up. Ashish's introduction will be shown in this Saturday's episode.

When contacted, Ashish told us, "I am shooting from yesterday, and I am already enjoying what I am doing. I have gone through a lot of preparations for the role, and I hope viewers like me as Chandragupta Maurya".

Catch the interesting post leap story in the Imagine show..

Reshabh 9 years ago But i Think they changed a Lot of Things, and Story made it into shortcut. First he becomes King of Lokhandi and then kills Dhananand. well lets see they take in proper track and no more shortcuts in future. Loving the serial till now.

Rituparnaa 9 years ago Rishi was really rocking the show.But anyways I hope the success continues for the show.

peihu 9 years ago i never wanted rushi to leave so early n by saying its an awaited leap is like rubbing salt to my wounds:((
waise saara ithihaas badal diya inlogon ne...jai ho!!!

Sidda8 9 years ago Thanks for the article. I'm excited for this leap. I can't wait to see how Rushi attacks D. I'm confident Ashish will satisfy our expectations and outperform himself. Best of luck Ashish!

tulipbaby53 9 years ago Aww...I'm going to miss Rushiraj!! It will be hard to adjust to the adult actor, but we have to do it because the story has to continue.

Lata 9 years ago will miss you Rushi :(((...our adorable bundle of talent ...God Bless You always...

captkirk 9 years ago can't wait to see Aashish Sharma in his new role after Bhaiyaji!!