Chennai, April 29 (IANS) Hollywood star of Chinese origin Jackie Chan has tacitly admitted in his official website that he did not know how to pronounce the names of Indian film stars.

'There were so many famous faces (from) Indian cinema. But I did not know how to pronounce their names,' C 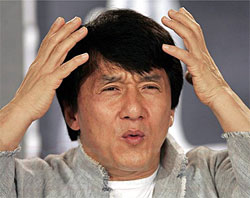 '(The film industry) in Hong Kong in China will have to work harder because soon Indian cinema will overtake us,' Chan predicted.

Significantly, Chan had evinced interest to work in Indian films during the trip saying: 'I am eagerly waiting for a good project here (as) India is the world's biggest market for movies'.

The film star denied media reports that had imported mineral water or misbehaved with the staff of Hotel Taj Coromandel, where he stayed for a few hours Friday.

He praised Indian cuisine, dismissing reports that he had Chinese chefs in tow.