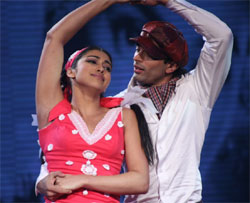 Jhalak Dikhhla Jaa Season 3 goes down the memory lane this week wherein the contestants danced to the Golden Era of Music of the 60's. However, the favorite of all Karan Singh Grover and Nicole had a bad day in office.

According to our source, "Karan and Shilpa Shukla were in the bottom two. Karan performed on the dance form called Cha-cha-cha on the Dev Anand number ' Maana Janaab Ne Pukaara Nahi'. His entry was very filmy as he entered in a cycle, but ultimately failed to impress the judges".

The fate of the two is in the hands of junta now. Let's see who gets evicted this time!!

13 years ago awww....plzz vote for him guys.....we shall make him win the competetion

+ 4
13 years ago Karan u rock...u will definately win jhalak