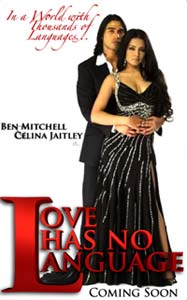 After the amazing response to her latest bollywood movie Golmaal Returns, Bollywood actress Celina Jaitley is all geared up to impress international audiences too!


Celina was recently at 'Hoyts La Premiere' in Auckland (New Zealand) for the Red Carpet Premiere of her first international film 'Love Has No Language' along with Australian co-star Ben Mitchell and Rugby star Monty Beetham who apparently was quite taken up by Celina's Indian beauty!


The pretty actress was floored by all the attention and warmth that she received In New Zealand. Celina seems to have had a lot of fun shooting with her Kiwi co-star Ben Mitchell. Celina also underwent
Featured Video 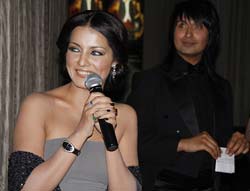 a 20-day training in Kiwi and Australian accents and has received good reviews for her characterization of a Kiwi Indian girl.


The movie is about a Kiwi Indian girl basically a second generation Indian girl born and brought up in New Zealand. Marina Roy (Celina Jaitley) is torn between the Indian values of old Indian traditions and the fact that she is actually a kiwi girl who has never been to India. A kiwi-Aussie boy of Maori (Ben Mitchell) origin falls in love with her and the story follows how she plans to avoid the marriage set up by her parents with an Indian boy ... who is actually gay!