View Profile
Karan Johar does things in style, and his 37th Birthday bash on Monday night at the Four Seasons hotel became the talk of the town due to the presence of the Bollywood celebrities and socialites.
The 100 odd guests included KJo's good pal Gauri K 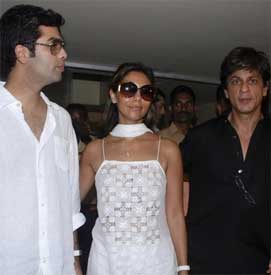 Featured Video
han with Shah Rukh Khan, Saif Ali Khan with Kareena Kapoor, Hrithik and Sussanne Roshan, Deepika Padukone and Ranbir Kapoor accompanied by Raveena Tandon, Aishwarya Rai and Abhishek Bachchan, Imran Khan and Avantika Malik, Riteish Deshmukh and Genelia D'Silva, Arjun Rampal and Mehr Jesia, Bipasha Basu and John Abraham and Karisma with hubby Sanjay Kapur, Farah Khan, Farhan Akhtar, amongst others.
The girls who came sans their men included Malaika Arora Khan with sister Amrita, Priyanka Chopra, Preity Zinta, Seema Khan, Maheep Kapoor, Rani Mukherji, Lara Dutta, Sonam Kapoor, Vidya Balan,Tanishaa, and Sushmita Sen. The solo men included Vivek Oberoi, Kunal Kapoor, Shahid Kapur, Tusshar Kapoor, Rahul Khanna, and Uday Chopra.
While wife Twinkle Khanna was present, Akshay Kumar was conspicuous by his absence perhaps because of his reported rivalry with SRK, or maybe simply due to inconvenience since Akki's currently shooting in Karjat.
Not only the Bollywood brigade, but also society divas like Parmeshwar Godrej and Tina Ambani were seen grooving to music at the party that went on till the wee hours of the morning.
No prizes for guessing why Salman Khan wasn't invited to KJo's 37th birthday bash.  The problem is that Karan's good friend Shah Rukh Khan and Salman are not on talking terms. So perhaps Karan wanted to avoid a 'scene.'  It's heard that Sallu's girlfriend Katrina Kaif was also invited, but she couldn't make it because she was still in South Africa and only landed in Mumbai late last night.

Are you wondering if Ash and Shah Rukh Khan have resolved their differences? Here's a bit of news: Abhishek and SRK were seen holding a long, intimate conversation while Ash kept silent but stayed by Abhi's side, hanging on to every word being uttered by them.

KJo arrived post 1.30 am and good friend Kaajal played host till he arrived. The party went on till 6 am!