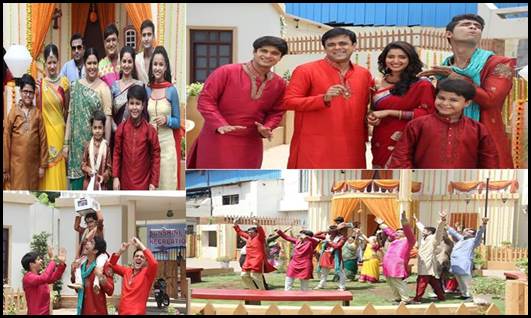 SAB TVâ€™s famous alien comedy show Badi Door Se Aaye Hain has been doing everything they can to keep its viewers glued to their show. The show has been including various comical concepts of the Ghotala family creating a hilarious scene which fills in everyoneâ€™s stomach with laughter.

With the amazing story line of including and adding flavor to their content seems to have been working pretty well for the show. In the upcoming track the viewers will see a celebration of a Brahmin festival called Janeu for the two handsome boys Pritesh and Mitesh enacted by Aryan Prajapati and Sneh Mirani respectively in the show. This festival mainly focusing on the Brahmin traditions seems to have got the Ghotala family in a mess because they being aliens are totally unaware of how the traditions are followed.

What will the Ghotala family do during the celebration? Will they create an awkward situation? Will the neighbors get to know of their secret of being aliens?

+ 2
5 years ago Badi door se aaye hain.. a lovely comedy. Love the show and every character of it...

5 years ago i can hear "oh my god mr ghotala, i don't believe this" already lol

8 years ago I thought starkids had it easy. looks like its easy for anyone who's remotely related too.. She looks pretty, though.

8 years ago Atleast she looks better than Sonakshi! I still dont understand why she got so famous for her one line dialogue in Dabangg! Let's see how she does in Rowdy! I have a feeling that it might be along the lines of dabang!

8 years ago good luking...but it depends on her acting