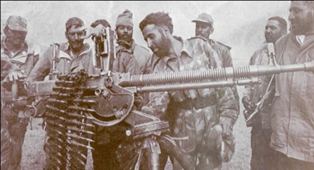 This Republic Day, National Geographic Channel salutes the men & women with nerves of steel. With a one-hour special documentary titled 'Nat Geo Inside: Indian Army' premiering on 26th January at 9 PM, the leading infotainment channel will be giving viewers a special access to take a closer look at all that goes into making the war heroes of India.

Strung together through a series of interviews, dramatic re-enactments and archived footage, in a narration of some of the most epic battles & operations in our country's history, Nat Geo Inside: Indian Army' will give you the chance to witness feats of survival & courage that led to the surrender of Pakistan in 1971, operations and strategy that led to our victory of the Kargil War & Zozila War of 1948 which for the first time ever saw the Indian army take tanks at a height of 10 K ft above sea level. This is not all. Watch out for the exclusive Nat Geo footage of the army post at Siachen Glacier.

Commenting on the relevance of the documentary for Republic Day, Ms. Debarpita  Banerjee, VP, Marketing, National Geographic and FOX International Channels said, "Nat Geo Inside: Indian Army showcases the courage, resilience, strategy and glory of the officers and the life within the Indian army. An apt show for this important day - so that the nation remembers what is keeping us safe inside the borders."