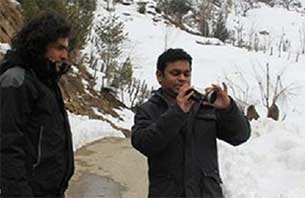 Double Oscar-winning composer A.R. Rahman said that despite his busy slate of work, he made time for Imtiaz Ali's "Highway" because he enjoyed working with him on "Rockstar".

"I was busy with many projects when Imtiaz asked me if I could work on the music for 'Highway'. I told him I didn't have the time but I could make time for it. We'd really enjoyed working on 'Rockstar' and I knew this journey should continue with 'Highway'," Rahman posted on his official Facebook page.

While music of "Rockstar" was a chartbuster, Rahman teased us with his work in "Highway" in its trailer which was released recently.

The film starring Alia Bhatt and Randeep Hooda is slated for release Feb 21 next year.

Rahman is currently busy with seven other projects in various languages. "Ai" and "Kochadaiiyaan", "Sattendru Maarudhu Vaanlai" and Kaaviya Thalaivan" in Tamil, "The Hundred-Foot Journey" and "Million Dollar Arm" in English and Hindi film "Paani".

He will also collaborate with Imtiaz in his next project "Window Seat".