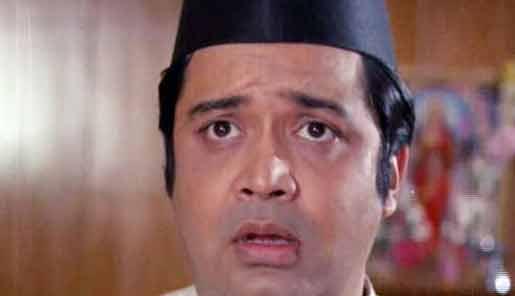 The void of a comedian with the subtlety reflected by Deven Verma will be hard to fill, said Bollywood celebrities Tuesday following the actor's death.

Known for memorable performances in films like "Angoor" and "Khatta Meetha", the veteran character actor and filmmaker died in Pune early Tuesday following a heart attack and kidney failure.

Filmmakers Karan Johar and Madhur Bhandarkar as well as actors like Riteish Deshmukh and Anushka Sharma took to Twitter to pay an ode to Deven, who was 77.

Here's what they tweeted:

Riteish Deshmukh: Deven Verma - incredible actor, comic excellence second to none. Thank you for making my childhood so memorable. Will miss you sir- RIP.

Manoj Bajpayee: Sad to hear that the great Deven Verma ji passed away. my heartfelt condolences to his family...RIP.

Vikram Bhatt: Saddened by the news of #DevenVarma passing away. Spent hours watching him and even imitating him. Thank you for the joy you spread sir.

Alok Nath: Rest in eternal peace Mr. Deven Verma, will always cherish the pleasurable moments spent with you, your subtle humour enthralled us all.

Tusshar Kapoor: RIP Deven Varma Ji, I grew up on your performances!

Milap Zaveri: RIP Deven Varma. What a fine actor with the most understated comic timing ever! The heavens will be entertained forever now.