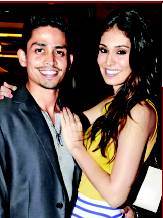 Star Plus dance reality show Nach Baliye season 6 which airs on Star Plus is one of the most popular dance reality show on television. Through this show we get to see the dance chemistry of the well known celebrities of the telly town and a few from bolly town too.
As according to the format of the show, we see one contestant jodi gets eliminated from the show every week. This time it is actress Bruna Abdullah and her partner Omar Farooq who are getting eliminated from Nach Baliye.

The jodi has been performing really well throughout and have shown a tremendous growth in their dancing skills. In fact they were one of the jodis who have been appreciated a lot for their underwater act that they performed last week. However, well their journey in the show has eventually come to an end.

Bruna Abdullah's fans are really going to miss her in the show. We wish Bruna Abdullah and Omar Farooq all the very best for their future endeavors.

GoldenLuna 6 years ago i think they deserve to b in the show...

.Nikki. 6 years ago They didn't deserve to go this early :( hopefully they will be back through wild card.

luvbbat 6 years ago What a spoiler!! The channel should sue TB for leaking this. I cannot believe that Bruna and Omar got eliminated. There are Atleast 3 other couples who can't even dance who are still there :(

As far as judges are concerned, Sajid is the most bias and inconsistent person on the panel. Aren't judges suppose to be fair?

KostinsQueen 6 years ago The underwater act done by bruna & omar last week was just awesome , then how could this happen...they are far better than other couple in the show,,, feeling sad for them

ghettogurl88 6 years ago Can fans complain to star plus in anyway? Because I feel like Sajid Khan needs to get kicked out of the show! I hate him as a judge. Jhalak Diklaja has better judges than NB ever will.

nikita_88 6 years ago TB please post articles after episodes air!
I DO NOT WANT TO KNOW WHO IS ELIMINATED TILL AFTER THE EPISODE AIRS!

mehbeer09 6 years ago raju needs to be out, i feel bad bruna is a great dancer..