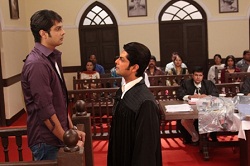 India-forums.com had earlier done an article on an Adaalat episode which was filmed under the sea in scuba diving suits. These episodes will be aired tonight and on Sunday evening on Sony TV at 7:30pm. Besides the under-water sequences another USP of these episodes is the fact that Anand Goradia (who plays the public persecutor of the show) is doing a double role in these episodes. Also he and his wife Swati Goradia have written the story, screenplay and dialogues of the same.

For these episodes I.M.Jaiswal instead of defending his own twin brother Yash Jaiswal, undertakes the role of the persecuting lawyer in court. He after all knows that his brother Yash has taken illegal shortcuts in life like stealing and drug peddling. Therefore he also suspects his brother of murdering his own boss. He excavates reasons for the murder motive and believes that the culprit should be punished even if he has a blood relation with him. Yash has been suspected of killing his own boss 120 feet underwater.

I.M.Jaiswal continues to be an arrogant and over-confident lawyer on the show who has a gift of the gab, wit and humour. K.D Pathak however has his one-liners to contradict him.

It will be interesting to watch how I.M.Jaiswal fights his own blood relation in court. For more updates on Adaalat please keep watching this space.

Waise can they bring in Shweta Tiwari as a recurring character!!!!!!

9 years ago Quie excied for tonight. Hope the episode is entertaining and logical too.