BollyCurry is back with the second and last part of the Bromantic Comedy articles! It's time to have a look at the popular bromances of the early 2000s to now! Yes... it's time for another look at some popular bromantic comedy jodis! 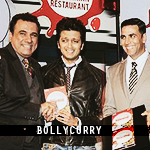 First up is a popular jodi from the hit movies Heyy Babyy (2007), Housefull (2010), and Housefull 2 (2012). Like from our last article, this is actually more of a threesome rather than a jodi. They are none other than Akshay Kumar, Riteish Deshmukh, and Boman Irani! While Riteish and Boman also starred in the hilarious Bluffmaster (2005) with Abhishek Bachchan, the real comedy was seen in Heyy Babyy, Housefull, and Housefull 2! Whether it was the hilarious dance number "Mast Kalandar" from Heyy Babyy or the scene when Boman made his entry to meet his daughter in Housefull, you're bound to be rolling on the floor laughing at their hilarious antics. Boman and Riteish are so comfortable with each other that they often end up giving us hilarious moments in award functions as well!
We're back to our greedy selves as we essentially beg this trio to get together again and give us another comic movie! 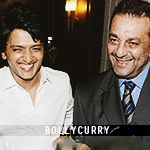 Since we're talking about Riteish we decided to mention his flare of comedy and another super hilarious bromantic jodi! This actor has come in Dhamaal (2007), Aladin (2009), and Double Dhamaal (2011). Any guesses? We're talking about none other than that the hilarious jodi of Sanjay Dutt and Riteish Deshmukh! Like many of the hilarious bromantic jodis, these two are known for their fighting and their attempts to outsmart each other in each movie. Doesn't the success of Dhamaal and the somewhat good success of Double Dhamaal prove that?
Let the fighting continue is all we can say. After all, the fights are what make us laugh a lot and make these two a real part of our bromantic comedy jodis! 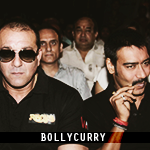 Since we're talking about Sanjay Dutt, we decided to bring his funny camaraderie with Ajay Devgn to light as well. Appearing in several movies together, these two specially made us laugh in Raju Chachu (2000), Hum Kisise Kum Nahin (2002), All The Best: Fun Begins (2009), Rascals (2011), and Son of Sardaar (2012). Like with Riteish and Sanjay, Sanjay and Ajay are also well-known for their fights in all these movies. After all this is what makes them such a hilarious jodi. Whether it is their fight for a girl, played by Aishwariya Rai Bachchan, in Hum Kisise Kum Nahin (2002) or their family feud in Son of Sardaar (2012), these two are bound to make you laugh!
In true Yo Yo Honey Singh style: Fight all the time, Fight all the time, Fight all the time, We do fighting all the time. 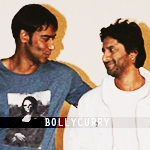 Ajay Devgn and Arshad Warsi bring another hilarious bromance onscreen. Starting with the hilarious Hogi Pyaar Ki Jeet (1999) where both played brothers out to take revenge in a very hilarious style from their parent's killer to the Golmaal series where they often end up fighting against each other for various reasons, these two have always made us laugh. They share such a good rapport that all their antics appear real and it doesn't seem like they're acting! Just check them out in any of their several movies, Hogi Pyaar Ki Jeet (1999), Golmaal: Fun Unlimited (2006), Golmaal Returns (2008), Sunday (2008), and you'll see what we mean.
We do want more of them together on screen; so here's adding one more bromantic comic jodi to our greedy list. 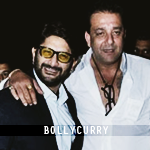 When we're talking about bromantic comedy jodis, how can we forget Circuit and Munnabhai? We mean Arshad Warsi and Sanjay Dutt! These two have worked in Munnabhai M.B.B.S.(2003), Anthony Kaun Hai (2006), Lage Raho Munnabhai (2006), Dhamaal (2007), andDouble Dhamaal (2013) together amongst other movies. A special mention to the trio Arshad-Sanjay-Riteish as well from Dhamaal and Double Dhamaal because if Riteish hadn't been part of the two movies, we would not have laughed as much as we did. A true Arshad and Sanjay movie either has a lot of fighting between the two or a true, deep friendship that makes us a little envious.
Give us more! We beg of you to give us more! We want to laugh and nowadays there is no dearth of comic stories needing true bromances! 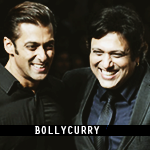 Do u wanna partner, oh partner, do u wanna partner? We don't need a partner because Salman Khan and Govinda (Arun) Ahuja are true partners in crime...err, sorry comedy. Yep one of the biggest hits of 2007, Partner (2007) was a superhit mainly for the hilarious fighting, and hesitant partnership or friendship between Love Guru/Prem (Salman) and Bhaskar Diwakar Chaudhary (Govinda). Whether it was Bhaskar's singing of "Prem bhai" or Prem's various attempts at making Bhaskar a refined man, each scene is bound to make you laugh!
So yes we wanna partner. But we also wanna see these partners again onscreen soon! 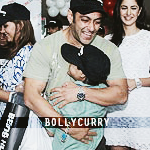 Salman Khan also makes a great partnership with another hilarious actor. We're talking about the man usually known as the "shortie" in movies, Rajpal Yadav! Rajpal and  Salman have appeared in a couple of movies together namely Mujshe Shaadi Karogi (2004), Maine Pyaar Kyun Kiya (2005), Partner (2007), and God Tussi Great Ho (2008). Whether it be the fighting between Chota Don and Love Guru in Partner or them working together to please Priyanka Chopra in Mujhse Shaadi Karogi, these two don't need to work hard to make us laugh.
Bring one of the kings of comedy together with the Dabangg Khan directors! You're bound not to loose out! 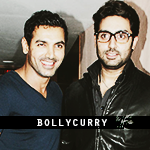 Finally here is the most important bromance, the dostana of Bollywood! Need any more hints? Of course not! Abhishek Bachchan and John Abraham truly gave dostana a new meaning. Every scene of theirs was a real treat to watch because every scene was bound to bring about a new bout of laughter. If you ask us, we can't choose any best scene because each scene was better than the next. Need we say more?
Jaane kyun dil janta hai, agar Dostana hai toh I'll be alright, I'll be alright!
Bromance is apparently one of the biggest methods for success in B-Town. So, directors be sure to cash in on this great formula because you can never go wrong!
Writer: Shreya S.
Editor(s): Alina S. and Gunia M.
Graphics: Virina R.
Do you have a suggestion or comment for BollyCurry? Drop us a PM at  BC_Dropbox today.
14 Likes