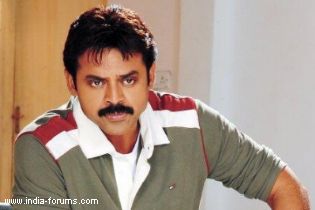 Actor Daggubati Venkatesh has many firsts with Telugu thriller "Drishyam". This is his first non-commercial film and his maiden venture with a female director. He says the "challenging" remake has helped him break all the trappings of a star.

Coming out Friday, "Drishyam" is an eponymous remake of a Mohanlal-starrer Malayalam blockbuster.

"I feel 'Drishyam' has given me the opportunity to stop doing the regular commercial songs and dances. It has helped me break away from the trappings of being a star and approaching a film with a different mindset," Venkatesh told IANS in an interview.

"It's a film like this that will encourage star actors to back more meaningful scripts, work with newcomers and detach themselves from star status and do meaningful films. The success of 'Drishyam' will change the face of the Telugu industry for ever," added the actor who did Hindi movies like "Anari" and "Taqdeerwala" in the 1990s.

Venky, as his fans fondly call him, has starred in several remakes over the years, but "Drishyam" was challenging for him.

"I have a good success record with remakes in my career. Audiences have accepted me in several remakes over the years. But this is the first time I'm starring in a remake of a Mohanlal film and therefore it wasn't easy to step into his shoes," he said.

"When you work in a remake, there's always the pressure of living up to the expectations of the original. Moreover, I was working in the kind of film I've never done before. Therefore, the overall experience was challenging," added Venky.

It was actor-filmmaker Kamal Haasan's inspiring words that motivated Venkatesh to do the unthinkable.

"I had met Kamal at Goa film fest a few months back. I discussed with him the kind of films I must be doing at this stage in my career. His advice was a real eye-opener and it came right before my brother and I watched 'Drishyam'. He asked me to challenge myself and that's exactly what I've done with this film," he recalled.

Venky, who comes from the family of a popular production house in Telugu filmdom, says he wasn't lured by the commercial success of the original.

"My brother and I watched 'Drishyam' long before it turned out to be a commercial success. We were literally shaken and deeply impacted by the film. That's when we decided to remake it in Telugu. We didn't choose it because it raked in the moolah," he said.

After having worked with several top directors in his over two-decade long career, Venkatesh has for the first time teamed up with a woman director, Sripriya Rajkumar.

When quizzed about what prompted him to work with Sripriya, he said: "It was a mutual decision. Both of us were on the lookout for people who'd be interested in the project. Since I've never worked with a woman director, I wanted to enjoy the experience of being directed by a woman as well."

"I thoroughly enjoyed working with her. The experience was far different from working with a male director. But, you see, nothing else changes other than how a person approaches the craft because irrespective of the gender, one has to deliver at the end of the day. That's what matters the most," he said.

In the last two years, Venky starred in multi-starrers such as "Seethamma Vakitlo Sirimalle Chettu" and "Masala".

"I really encourage multi-starrers because it gives me the chance to work with younger heroes. But, even for these films, I give prime importance to the characters and don't just blindly sign them," said Venkatesh.