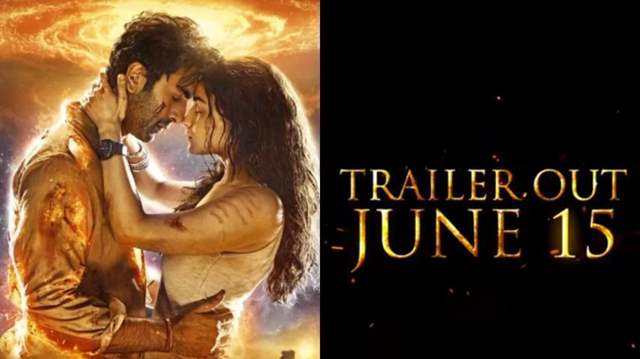 Ranbir Kapoor and Ayan Mukerji have been the center of attention as they left for Visakhapatnam to promote their film Brahmastra. Pictures and videos from Visakhapatnam have gone viral on the internet, and for all the right reasons.

Ranbir is shown getting a lavish welcome in the city, complete with a rose petal shower and a crane garland. And now, Ayan has revealed that the trailer for Brahmastra, which has been widely awaited, will be released on June 15th.

Soon after the announcement of the trailer's release date fans went gaga over the video shared by the makers. One commented "This is going to be epic" while another wrote, "I am waiting for this". Another fan commented, "Ranbir back with bang!".

During their journey to Vizag, we've heard that Ranbir, Ayan, and SS Rajamouli would seek blessings at the famed and ancient Simachalam temple before meeting fans in a movie theatre!

'Brahmastra,' one of the largest cinematic extravaganza of 2022, has been eagerly anticipated by movie buffs all across the world. From the motion poster to the "Kumkumala" teaser song, all of the film's assets have caused a stir among fans across the world.

Produced by Star Studios, Dharma Productions, Prime Focus and Starlight Pictures, the magnum opus will release theatrically on September 9, 2022, across 5 Indian languages – Hindi, Tamil, Telugu, Malayalam, and Kannada with a stellar ensemble cast of Amitabh Bachchan, Ranbir Kapoor, Alia Bhatt, Mouni Roy and Nagarjuna Akkineni. After a long delay due to the pandemic, the audience will finally get to witness the magic of Ranbir and Alia on the big screen.