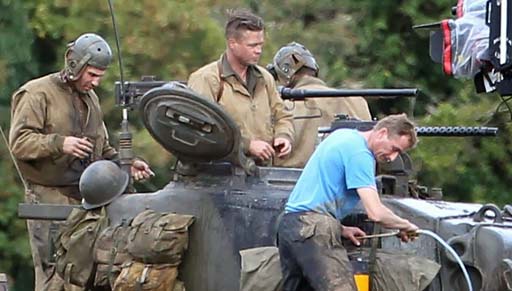 Brad Pitt's "Fury", the India release of which has been pushed ahead by two weeks to avoid proximity with Shah Rukh Khan's Diwali offering "Happy New Year", will be dubbed in Hindi as "Fauji" - inspired by the title of the Bollywood superstar's 1988 TV show.

Since "Fury" features a Hollywood star as big as Brad Pitt, and that too in the role of an army sergeant, the film's distributors in India are also dubbing it in Hindi.

The decision to rename "Fury" as "Fauji" cropped up as a tribute to Shah Rukh, who played an army officer in his TV show of the same name, which was among his initial works in Indian showbiz.

"We feel that the film connect will be phenomenal. War films generally have a connect with the Indian audiences due to our own trysts with wars and battles. Brad Pitt epitomises the essence of a 'fauji' and hence we have decided to relase the dubbed version of 'Fury' as 'Fauji'," Deepak Sharma, chief operating officer, PVR Pictures, said in a statement.

Like SRK, Pitt had started his career in a big way from the small screen. Both of them worked their way to success on the silver screen, and they now savour global popularity.

A war drama, "Fury" will splash across Indian screens Oct 31, two weeks after its international release Oct 17. The decision was taken keeping in mind the Diwali festivities and the release of Shah Rukh's "Happy New Year".