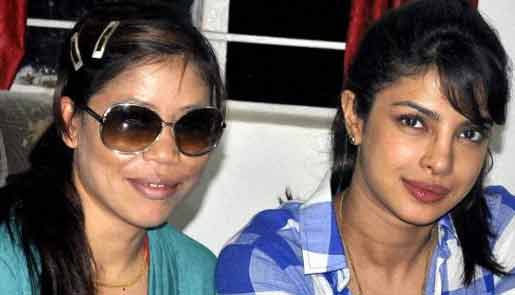 Boxing champion M.C. Mary Kom's husband Onler has joined forces with "Mary Kom" co-producers Viacom18 Motion Pictures to ensure that the biopic on his wife gets released in their home state Manipur.

Hindi films are not being shown in Manipur for the last few years reportedly due to threats by some militant outfits.

Even though the film couldn't be released in the state when it released elsewhere Friday, efforts are on for at least a couple of screenings in Imphal. Onler has been trying to make it possible himself.

"We've been working directly with Manipur Chief Minister Okram Ibobi Singh's office and have all their support. We've done our best to get the release in Manipur. Onler has also been very helpful in trying to get the release. Let's see where we end up finally," said Ajit Andhare, chief operating officer, Viacom18 Motion Pictures.