No one can deny that Hollywood has been single handedly ruling the business of cinema worldwide since the inception of movies. It is no surprise then that the movie industries of rest of the world are playing second fiddle to the monstrous enterprise that is Hollywood. Bollywood, which is often accused of blatantly copying Hollywood movies (sadly, at times rightly so), is the closest thing to Hollywood east of the Atlantic. Despite the Western influence, Indian cinema has created masterpieces on its own right. When it comes to talent and star power, Bollywood is second to no one and can stand its ground against the Western adversary.

In this article, BollyCurry takes a look at the some of the talented and beloved Bollywood actors and their possible Hollywood counterparts in terms of acting, persona and popularity.
Shah Rukh Khan - Tom Cruise 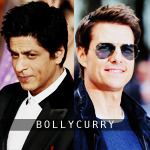 The chances of anyone failing to recognize these two actors in any part of the world are pretty slim to none. When it comes to popularity, Shah Rukh Khan and Tom Cruise easily rule all the charts. Since the beginning of their respective careers, Khan and Cruise have carved a niche for themselves and they continue to rule it unparalleled. So what happens when they reach the golden days of life and aren't what they used to be at the height of their careers? Need not worry. If nothing else, the impact of the many blockbusters and the characters they brought to life on screen won't be forgotten, not in the least.
Deepika Padukone - Jennifer Lawrence 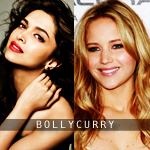 Two ladies whose names have become synonyms for success. Jennifer Lawrence is undoubtedly America's sweetheart of today. With her charming personality and strong work as an actor, she has been riding a high over the past few years. 2013 did the same for our tall beauty Deepika Padukone. While 2012 gave us a glimpse of her acting prowess in Cocktail, 2013 was the year which belonged solely to her. Not only did her acting shine through in all four movie she starred in, but she also contributed massively to the commercial success of these movies. With a Filmfare award for Best Actress freshly added to her resume, Padukone is the one person everyone wants to work with. Yes, a lot like Lawrence who has recently won numerous Best Actress in lead and supporting roles accolades.
Salman Khan - Robert Downey Jr. 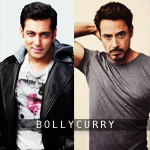 While this combination might come as a surprise for some, it in fact should be one of the most obvious pairings. Salman Khan and Robert Downey Jr. are two of the most commercially successful actors in the world. Mr. Downey Jr., who is part of two most marketable movie franchises, Iron Man and Avengers, was one of the highest grossing actors of 2013. Last year, his movies made over one billion dollars worldwide. While Khan's latest release, Jai Ho, failed to garner the same commercial success of its predecessors, he has many blockbusters under his belt. Films such as Ek Tha Tiger, Dabangg and Bodyguard all of which starred Mr. Khan are three of the highest grossing Indian films of all time. The comparisons between Khan and Downey Jr. were so much so that it was once rumored that Mr. Khan will be essaying the role played by Mr. Downey Jr in the Indian remake of Iron Man.
Priyanka Chopra - Angelina Jolie 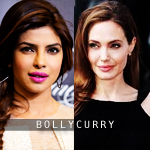 Two strong, independent women who have marked their place in their field, that too on their own terms. Not only this, Chopra and Jolie are two actresses who can do justice to physically exhausting roles in action movies. No other actresses can gruel it out like these two can. Jolie is also well known around the world for her philanthropic ventures and her role as a Goodwill Ambassador. While it might not be common knowledge, Chopra also participates in many philanthropic activities and is a Goodwill Ambassador for UNICEF. Not only that, these two celebs aren't shy about sporting their tattoos or that enviable natural pout of theirs.
Aamir Khan - Leonardo DiCaprio 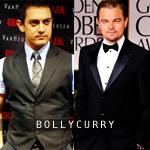 When it comes to acting prowess, there isn't a more talented pair than these two actors. Both inherently talented actors, Khan and DiCaprio began their careers as child actors and went to to become two of the most acclaimed stars in the world. Aamir Khan, who is popularly referred to as "Mr. Perfectionist", is also known for his extremely realistic performances. He is one actor whose acting ability is often compared to the best of Hollywood actors. DiCaprio, who has demonstrated high levels of dramatic versatility, is known for the intense preparation he puts into his roles. Both actors are also award show favorites. Khan is a winner of plethora of national awards and several international awards, while DiCaprio is a six time Oscar nominee and winner of many other trophies. In addition to being superstars, both are dedicated philanthropists as well.
Kangana Ranaut - Scarlett Johansson 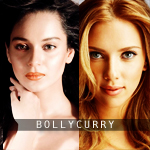 They are young, sharp featured and very, very sexy. While they are known for their sultry appearance, that doesn't mean that they are all looks and no substance. The two of them are talented and critically acclaimed actresses as well. Ranaut has won many awards including National Award and Filmfare but both have made a mark for themselves and are known for playing the roles of gutsy female characters, that too quite convincingly. Not only that, both have explored their singing chops as well. Ranaut tested out her vocal chops by singing a romantic number for Krrish 3, while Johansson is a relatively successful singer with two studio albums under her belt.
Ranbir Kapoor - Robert Pattinson 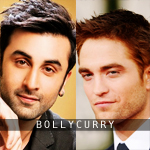 Two undoubtedly pretty faces. Robert Pattinson rose to instant worldwide fame as the dazzling star of the Twilight franchise and Kapoor became the one to look out for due to his suggestive towel dance in Saawariya. While their good looks gained them initial attention, it is their acting chops that ensured staying power. This is especially true of Kapoor who has grown to become the best actor of the current generation of Bollywood. Not only that, with all the endorsements he has and the number of movie offers he gets, he is clearly the most bankable star as well. Something a lot like Pattinson whose work in the Twilight series gave him such fame that he was part of the 2010 "Forbes Celebrity 100". Not only that, both young actors have a huge female fan following.
Kareena Kapoor Khan - Cameron Diaz 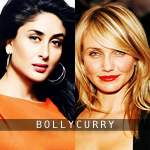 While it is tough to find a Hollywood counterpart to India's dear ol' Bebo, for she is in fact unique, Cameron Diaz would be a close match. Both of these ladies have done some amazing work in their careers, both critically and commercially. Each of them have played at least one character for which they will be remembered forever. Kapoor role in Jab We Met and Diaz's in There's Something About Mary are two such roles. While both of them have crossed their prime age, their popularity hasn't decreased one bit and are still much sought after in their respective parts of the world.
So, here it is. A little, fun list of some actors of Bollywood and their similarities with Hollywood actors. Agree? Disagree? The comment section is all ready for your feedback!
Writer: Maisooma B.
Editors: Marsh P. and Jenifer Y.
Graphics: Fizii
Do you have a suggestion or comment for BollyCurry? Drop us a PM at BC_Dropbox today.