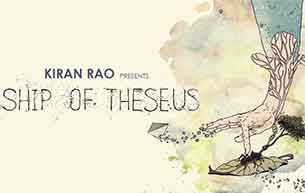 Bollywood star Ranbir Kapoor is mesmerised by "Ship Of Theseus" and says no other film has moved him as much as this one and that director Anand Gandhi succeeds in connecting with the audience through the movie.

"It was a very wonderful film, very powerful. I don't think any other film has moved me so much as 'Ship Of Theseus'," Ranbir said here Tuesday at the special screening of the film.

"I think Anand has definitely reached the audience," he added.

The screening was organised by Aamir Khan and Kiran Rao that was attended by actors Rani Mukerji, Katrina Kaif, Priyanka Chopra and Ayushmann Khurrana and filmmakers Kunal Kohli and Rajkumar Hirani, among others.

Kiran is releasing "Ship of Theseus" in collaboration with UTV Motion Pictures. It's a story about human values and features three characters -- an experimental photographer, an ailing monk and a stock broker.

Hirani too is impressed with Gandhi's "Ship of Theseus" and says the film shakes you from the soul.

"This is a film that kind of shakes you from the soul. The film has been made so realistically that I just don't have words ... people have to watch the film to see how it can shake you up," Hirani said here.

"Now it feels that the kind of cinema that we have been making so far is so inconsequential and small," added Hirani, known for films like "Munnabhai" series and "3 Idiots".

Produced by Soham Shah, "Ship Of Theseus" is coming out Friday.