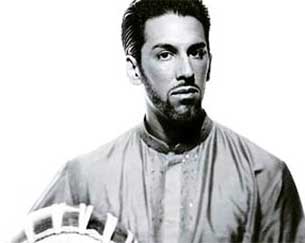 Percussionist Salar Nader of Gypsy All Stars group, that will highlight the seventh edition of the two-day SulaFest 2014 in Nashik, says the Hindi film industry's music and classical strains are dependent on each other.

A student of legendary Indian tabla player Ustad Zakir Hussain, Nader is an Afghani who was born in Germany and is now based in San Francisco. He believes that different genres of music are inter-dependent.

"A lot of Bollywood music has its roots in the classical form; so in a way, we are all interdependent on one another. This industry is like a huge river with streams which start and stop in different places. I hope we can all enjoy the music-making process together," Nader told IANS in an email interaction.

Excited about his repeat performance in India on Feb 1 after the 2013 Rajasthan International Folk Festival, he said the Nashik audience should expect a sonic boom that is a blend of high energy and high impact.

French guitarist and vocalist Georges Reyes, another member of Gypsy All Stars, said their gypsy music is a celebration.

"We love sharing our music. The rumba is one of the most joyful rhythms in the world. The Rajasthan rhythms are powerful and we hope that no one will stay seated," said Georges, whose brother Mario is also part of the group.

The other members of the group are Cedric Leonardo, Arleen Hurtado, Alfredo Cceres, Dilawar Khan, Rais Khan and Gyanshyam Khan. They come from different parts of the world and the band is currently based in Los Angeles.

Georges also says their music is always influenced by who is in front of them.

"The energy of our audience is the key. We are not a group to play the same thing every time. Each performance is unique," he said.

"Cedric Leonardo, who formed Gypsy All stars, started the project with Mario. It was a natural process which started out of our love for the rumba and Cede's love for India," he added.

Mesmerised by India, they are looking forward to much exploration in the country.

"To discover the best curry and to explore the music of India. It's a clich, but I would love to see the Taj Mahal," said the French guitarist and vocalist.

He would also like to associate himself with an Indian artist.

"Kailash Kher. He sings about God," said Georges when asked about one Indian name with whom he would like to work in the future.

If Georges is keen on visiting the Taj and working with the "Teri Deewani" singer, Nader is eager to go to Dehradun.

"My grandmother says that we belong to the Amiri dynasty, which had its roots in Dehradun. I hear that there is a shrine...This used to be a bed story which my grandmother told me," said Naser.

"I am looking forward to having an amazing experience and would love Gypsy All Stars to collaborate on a Coke Studio project soon," he added.

In addition to their music, the SulaFest audience can enjoy performances by artists like Dub Pistols, Susheela Raman and Vasuda Sharma. They can also expect a mix of wine, food and fashion.