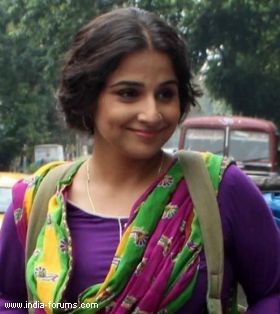 Vidya Balan's assortment of aliases in "Bobby Jasoos" is not the first major Bollywood star to look unrecognizable in disguises. Before Vidya, there have been like Amitabh Bachchan, Shabana Azmi and Kamal Haasan, who've pulled off different looks.

Vidya's co-star Amitabh Bachchan was completely unrecognisable as a child suffering from Progeria in "Paa". Getting the superstar ready every morning was an ordeal, recollects director R. Balakrishnan aka R.Balki.

"It took the make-up man four hours every morning. Once the make-up was done, Amitji could't eat, drink or go to the bathroom. We were all petrified about his health. But this is not an ordinary man. He went through the long and painful process day after day for four hours," he said.

Unrecognizable in his own right was Kamal Haasan in "Chachi 420". He had to dress up as a nanny to his screen daughter and had to also look attractive enough for the little girl's grandfather Amrish Puri to fall in love with.

The actor used an aunt as a reference point for his character. The tireless perfectionist spent hours over the disguise.

"Getting into the skin of the character was very important. I didn't want to mimic a woman's body language or clothes. I wanted to feel talk, walk and react like an actual woman," said Kamal about one of the best and most convincing drag-act ever in Indian cinema.

When Shabana Azmi decided to play a witch in Vishal Bharadwaj's "Makdee", she didn't know what she was getting into.

Says the method actress: "It was harrowing, to say the least. The make-up used to take forever. When I looked at myself in the mirror, I couldn't recognize myself. And then on top of it all, to have my husband comment, 'Why did you need make-up to look like a witch?' was too much!"

In "Bobby Jasoos", Vidya goes through a number of disguises - each more startling than the previous one.

"The team at work on Vidya's looks and get-ups was irreproachable. Vidyadhar Bhatt who is a powerhouse talent did the special make-up. Theia Tekchndaney was the costume designer. So we were spoilt for choice. The challenge was in choosing which look we went with," she said.

Which of the disguises was the most difficult to do?

"The disguise of the maulvi in the opening sequence was the most time-consuming. It took us about three hours during the looks test to polish it up," said Dia, adding that Vidya took about an hour to get into each disguise.