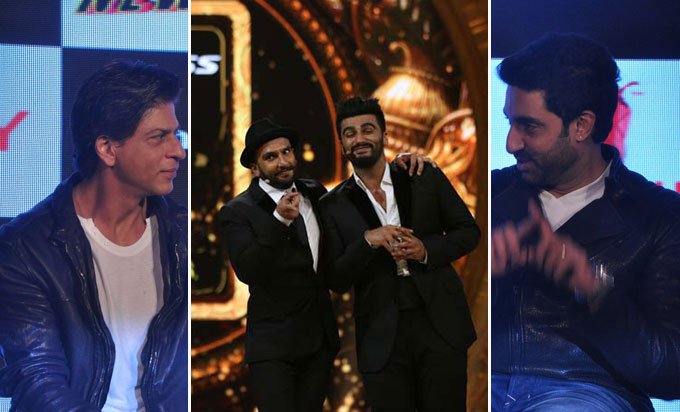 1st of April brings with itself a horde of laughs as people attempt to prank each other to celebrate April Fool's Day!
To commemorate the light- hearted fun, we bring to you a  list of the most notorious Bollywood Pranksters. Take a look...
1. AJAY DEVGN
If playing pranks was ever a contest, Ajay Devgn would win it for sure. The intense actor, who plays action and comic roles with equal ease, is actually a riot on sets! Many reports of him playing pranks on various co-stars have often been reported.
During the Singham Returns shoot, Ajay and the director, Rohit Shetty made up a story about a ghost wandering the hotel at night. The two even went to the extent of stating that it was a woman in a white saree who had been murdered in one of the suites and now her spirit wandered the corridors. Kareena Kapoor who was actually staying in that suite got very spooked out and told the two to stop the discussion immediately. But the pranksters continued making up tales about the fictitious ghost and scaring the living wits out of Bebo!
Once during the shoot of Himmatwala, he secretly entered Director Sajid Khan's bathroom and left blood stains all over the floor and tiles. The director who was busy in the phone had no idea that anyone had even entered his suite. The mysterious blood was the topic of many discussions on the sets and the director was even considering moving from the hotel!
2. ABHISHEK BACHCHAN
Junior B is one of Bollywood's most well known pranksters. He keeps pulling his co-star's legs on sets. During the making of Happy New Year, he locked Farah Khan, the director and his long time friend, in her Vanity Van! The prank went so berserk that Boman Irani, who heard Farah bang the doors and shout from inside the van had to rush to open the door as the crew was on sets waiting for the director to arrive!
3. SHAH RUKH KHAN
Shah Rukh Khan is known in the industry for his wit and panache, but the actor is a kid at heart too! He once pranked Hrithik by telling him that he does not shampoo his hair at all! And that not shampooing was in fact, his secret to his gorgeous mane. Hrithik stopped shampooing his hair, "till they became a rug" he quotes, before he realised that it was actually a prank!
Recently on the sets of Dilwale too, Shah Rukh Khan, Kajol, Varun Dhawan and Kriti Sanon pranked Varun Sharma when they told him that Kajol was very upset with him as he did not wish her on sets. Kajol also played along and poor Varun turned red and almost started crying when Kajol burst into a fit of laughter and the prank was revealed!
4. ARJUN KAPOOR AND RANVEER SINGH
The on screen- off screen buddies are known for their frivolous spirits and notorious nature. Once while shooting for Gunday, they heard that Shahid Kapoor was also shooting close by. All covered in mud and soot, they climbed on top of Shahid's car outside the studios pretending to be crazy fans. They kept shouting his name and calling out for him and created a huge ruckus on the sets, until director Prabhu Dheva recognised the two pranksters!
Arjun also recently participated in a prank with RJ Arpit, where a video of the actor slapping the RJ was released. The internet broke as the video went viral before the release of his film Ki and Ka. Later it was revealed that the slap was a part of an elaborate prank!
5. RANBIR KAPOOR
In a recent interview post Tamasha, Deepika was asked who she thought the better prankster between Ranbir and Ranveer was. And much  to the audience's shock, the actress chose Ranbir!
Though we are not surprised. If reports from the sets of Yeh Jawani Hai Deewani are to be believed, the actor replaced water in a song sequence with vodka which co-stars Aditya Roy Kapur and Kalki Koechlin consumed. What followed was a riot of laughter and an extremely fun shoot, but it was also a little difficult to shoot with the actors in such a state!
0 Likes