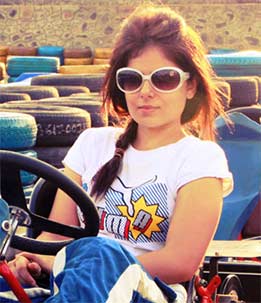 Alisha Abdullah is set to make her cinematic debut with upcoming Tamil thriller "Irumbu Kuthirai", which will portray her in the role that's true to her real life persona - a bike racer.

"The film is about two biker groups with a passion for racing. We thought it would be ideal to have a real racer as part of the story. I was told Alisha had turned down several film offers in the past, but I still approached her and she happened to love her role, which is of a racer," director Yuvaraj Bose told IANS.

"She instantly agreed to do the role. I think she will fit the bill because she just has to be herself in the film," he added.

In the film, Alisha is paired with Vietnamese actor Johnny Tri Nguyen, who had debuted with Tamil film "7am Arivu".

Alisha, who started driving at the age of 9, won her first championship title when she was 13 years old. She is also a popular Indian car racer and has participated in several national championships.

Prabhas' loverboy avatar for Radheshyam gets an overwhelming response; ...

Janhvi Kapoor doubles the trouble; Uncovers her sizzling avatar in ...