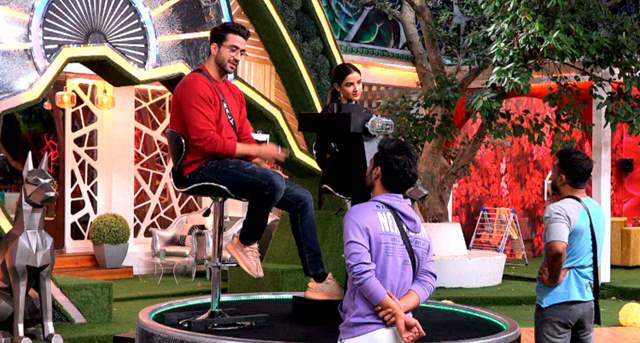 With Bigg Boss and Salman Khan changing the scene completely for the housemates, things are literally on fire now! This is the Finale Week and the housemates know that four from among them will be eliminated. They know that any moment could be their last and are revving up their game constantly. Bigg Boss asks the housemates that the first eviction will take place now. The housemates are all tensed as Bigg Boss presents them with another mentally challenging task. The housemates have to answer some harsh and teekhe questions posed to them by their fellow contestants.

First up are Aly and Jasmin sitting in the hot seat and the two are grilled by others. Kavita and Nikki completely overwhelm the two with some really biting questions to which Aly and Jasmin reply successfully. Rubina also grills Jasmin and ensures that she replies to them all. Kavita and Nikki are next and we see another grueling interrogation by Jasmin. Eijaz and Rahul go next and they also face questions about their behaviour on the show and about using other people for their advantage.

Rubina and Abhinav face the toughest round of questioning and are blamed by Nikki and Kavita for using their personal issues to gain attention. This leads on much longer after the game is over and Nikki and Abhinav get into an argument over it. Jasmin and Aly share a very emotional time, as they see the possibility of either of them being evicted from the house.

Will Rubina and Abhinav be able to withstand accusations from the housemates? Who will be the housemate that will get evicted on the first day of the Finale Week?