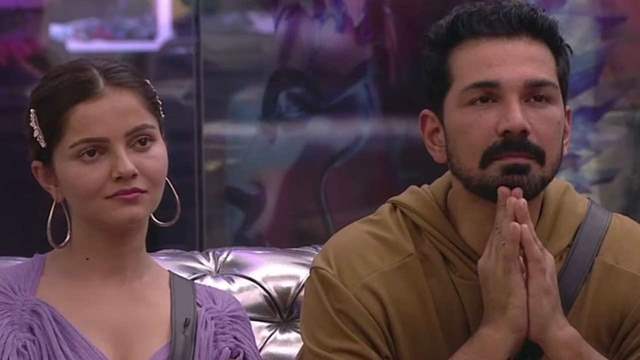 Bigg Boss 14 witnessed a rather shocking mid-week elimination when Abhinav Shukla was evicted earlier this week. While his journey in the house has been one of its kind, he has had his ups and downs, fights, and also made bonds for a lifetime. We recently got in touch with Abhinav where he got talking about everything that went inside the house, right from his bonds to wife Rubina, and more.

Tell us about your journey.

The best part of the journey is the journey itself, I learned new things about myself, for example, I overcame the fact that I was lazy, I generally used to stay away from places where there are arguments or fights, I used to leave from there and that was a shortcoming that I have corrected. The best part was that Rubina and I have come out stronger after the show, and what else does one want. However, if you are running a race and someone also running the race leaves you behind, it is understandable, but people come from outside and cause your fall, that feels wrong, but it is okay, that is the design of the show, so it is all okay.

A lot has been told to you, be it calling names, or saying you have come so far because of Rubina. What do you have to say?

Calling each other names, making others feel bad, these are all signs of weakness. Everyone knows in the Bigg Boss house that one can not do anything, but only say things to each other and I think that is a weakness only, one won't be able to do those things outside the house. For example, Eijaz Khan and Rahul Mahajan were having some fun where they also indulged in some physical fight, and I only asked Eijaz if he would have done the same had he been outside, and he did not have an answer, hence telling all these things are a sign of weakness. I agree that one might say things in anger but it cannot happen again and again, and after a point of time, one stops getting bothered by those things because we tend to have a defence mechanism. And whatever happened inside the house, I have left those things there, because one will go crazy to bother themselves after exiting the house.

Paras' decision to declare Rubina the winner received a mixed reaction. Do you think it was unfair?

Honestly telling you, I haven't seen the epsidoe. I haven't been watching a lot of the social media feed because I don't like people yelling at Rubina, and there hasn't been any decision in the Bigg Boss house that everyone felt was fair, someone find it fair and someone feels otherwise. I want to limit it to there and because I wasn't there, I want to reserve my comments on that.

She gave her ticket to Nikki, are you in agreement with that?

I wasn't there so I can't comment, but then who else? Because Nikki was a natural choice because no one talks to her properly in the house and she has also worked really hard on her journey ever since she has come, so I think she was just the natural choice.

Do you feel Nikki's friendship is genuine?

I honestly cannot comment on how sincere is Nikki towards Rubina, because now only one week is left, people will do anything to survive and win, I know there is an emotional bonding, but I told Rubi not to get emotional and expect a lot because now, it is every man for himself. If there is a situation where she has to choose between her and Nikki, she will choose herself always.

Do you regret the entire saga with Rakhi Sawant and felt that you should have stopped earlier itself?

I regret that I did not strongly tell her to not do it, I gave her the leeway and yes, I should have done soemthing in the very beginning. She told me herself that I am only doing it for entertainment, and I told her that as long as you are laughing and making others laugh, do it, because what better than making people laugh in that house where there is a lot of stress, but when she crossed the line, she still did not stop. When a person is told something, they should take a step back, and understand, and not cross all other limits and go beyond, but she did that.

Will you be friends with her out of the house since you did share a bond after all?

Whatever happened, I can forget it, but I can't forgive. People say the opposite right, but that was something that happened inside the house, people are under stress, and I don't want to drag it outside the house. There are 4-5 people that I like and I want to be friends with, that is what I would rather maintain.

Do you think that you being someone who is an intellect and finds logic in everything is something that backfired on you?

I was sure about one thing, what I am, I am going to be honest about myself, and I will be what I am. The show is about patience, the show is about how you take the humiliation, and that is a very big thing I am saying. You don't need to be very intelligent or knowledgeable to be in the show, it is more about that, and people need to hear your opinion, so I did not use any wisdom, I just used common sense. People fired their shots, but I was still loading my gun, and that is what the show is about. I knew my intellectual side, or the way I see the world in a scientific way, won't be appreciated and contestants won't appreciate it, but the audiences did.

It is no secret coming to your and Rubina's story that was explored in the show. What would you say to that after having come out of the show?

Do you feel that you and Rubina were targeted by Salman Khan unnecessarily in multiple instances?

All I'll say is that it is a show about speaking, so all sorts of opinions are welcomed, but I was very firm on one thing that whatever Khan saab tells us is for our betterment, so I will not feel let down about the fact that he told us things, but I will try to learn from it because he is trying to guide you about things, and anyone who is smart will only do exactly that, and I came out stronger after every Weekend Ka Vaar.

How have you changed as a person post surviving in the house for 130 days?

I have become better at arguments, at debates, and my IG has taken a dip, so it will take some time for it to come to normal. I am a creative person and it will take time for me to deadapt and get back.