View Profile
Bollycurry brings to you, Big Stars in the Making! Watch out for these five this year! 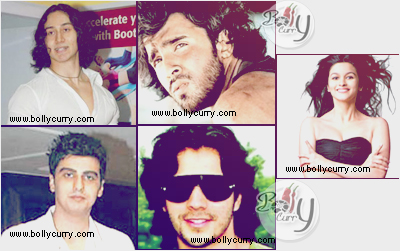 He will be seen in Karan Johar's latest venture Student of the Year which is rumored to be directed by the one and only Siddarth Malhotra that directed the blockbuster We are Family. If the rumor is true, then it will be Varun's 2nd time working with the director as he worked with him in past as KJo's assistant on the sets of the phenomenal My Name is Khan. Starring opposite this new handsome hunk is none other than filmmaker Mahesh Bhatt's daughter Alia Bhatt. Shooting of the film is believed to start sometime this month.

Arjun, the 25 year old actor who did a workshop for film editing at Asian Academy of Film and TV Noida, is ready to rock the silver screen under the Yash Raj Films banner! YRF may not have done so well the past few years but it has always been first in line when it comes to publicity and marketing! If Arjun is lucky, like Ranveer Singh of Band Baaja Baraat, he too will be the new eye candy very soon!

Although the famous filmmaker was going to launch his own daughter under his own banner, he chose Kjo's Dharma Productions and SRK's Red Chillies Entertainment instead. Smart way to avoid controversy! The gal will be appearing soon in Student of the Year opposite Varun Dhawan!

20 year old Jai Hemant aka Tiger Shroff is all set to enter the Bollywood industry in the remake of Hero which was his father's first film as well. Subhash Gai, is ready to launch the newcomer, just as he had done for father Jackie.

Nilesh will be launched by choreographer turned director Ganesh Acharya opposite the South-Indian actress Madalsa Sharma. Sanjay himself has been giving the lad tips to get him ready for his film Angel.