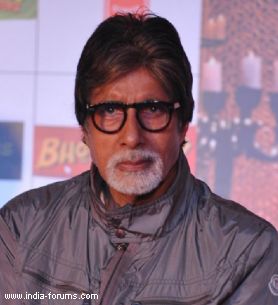 Megastar Amitabh Bachchan, who has spent more than four decades in the movie business, had to face a "strange" moment when he had to shoot at the Seven Hills Hospital, the place where he underwent surgeries and saw the birth of Aaradhya.

"Shooting at the Seven Hills Hospital...venue of my surgery and the birth of Aaradhya... Odd acting out what I had been through real," the 71-year-old tweeted.

"...it was strange to be enacting that which I had been through in reality! So the Ot (Operation theatre) and the ICU (Intensive Care Unit) centre as I was in for my surgery, now recreated for a scene and the difference being that this was make belief and that was not," he posted on his blog srbachchan.tumblr.com.

The megastar was admitted to the Seven Hills Hospital Feb 11 where he underwent two abdominal surgeries. His health condition stems from his near-fatal accident on the sets of "Coolie" in 1982.

Aaradhya, granddaughter of Amitabh, was born at the same hospital Nov 16, 2011.