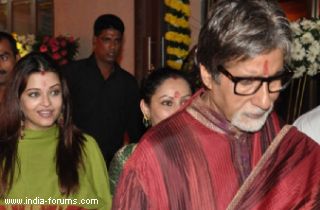 'I am also most touched by the decision taken by the electronic media on the coverage issue for Aishwarya's delivery... humbled!!' Amitabh posted on his Twitter page.

According to media reports, the Broadcast Editors Association (BEA) has issued a 10-point advisory to its members on coverage of the birth of the veteran's grandchild.

When the 69-year-old veteran was being asked whether he approached the Information and Broadcasting Ministry (I&B) to ban TV channels from placing reporters and cameras outside the hospital, Bachchan took to the micro-blogging site to clarify.

'I&B and media matter! Firstly, I have no such intention ever, secondly do you really think I&B would listen to me!?? No way baby,' he wrote.

Aishwarya is expected to give birth in mid-November.

I want to do a negative role: Akshay Kumar

He has dabbled in action, romance and comedy, but Akshay Kumar now wants to play a baddie in a film.

'I haven't done a negative role since quite some time now. So I want to do such a role,' Akshay told IANS.

The actor, who will be seen in fun film 'Desi Boyz' with John Abraham, was last seen in a negative role in 'Ajnabee' in 2001.

In an industry where celebrity hairstylists are hired to style actors' looks, Arjan Bajwa was made to get his locks chopped by a local barber in Bijnor for the film 'Lanka'.

Director Maqbool Khan, who is helming ASA Production's 'Lanka', wanted some last minute changes in Arjan's look, and the local barber seemed to be the best bet.

'I wanted the perfect look for his character, and when we were starting to shoot, I still wanted a little change in Arjan's style. So I looked for a local barber and tried him out. I have to say he was good, so I convinced Arjan to go for it too,' said Khan.

Model-turned-actor Arjan, seen in films like 'Fashion' and 'Crook: It's Good To Be Bad', says he was nervous about the haircut, but was impressed with the end result.

'It's true that my look in the film is not styled by some renowned hairstylist as happens in most of the films. I was scared and of course very reluctant about getting a hair cut at some local saloon, but trust me this is one of my best hair cuts and the experience was amazing. If it wasn't for the film, I would have never done something like this,' he said.