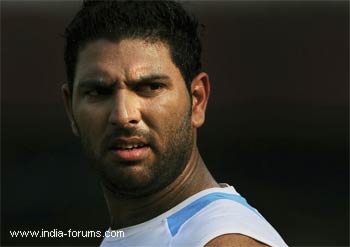 Megastar Amitabh Bachchan says he is shocked to hear about star cricketer Yuvraj Singh's illness and prays for his well being.

"Shocked to learn of Yuvraj Singh down with cancer..Yuvraj if you read this, know that we all pray for you..All shall and will be well," Amitabh wrote on his Twitter page.

Yuvraj has been diagnosed with a malignant tumour in his lung and is currently undergoing chemotherapy at the Cancer Research Institute in Boston, US.

Hrithik Roshan and Karan Johar went down the memory lane - while the former reemembered dressing up for Abhishek Bachchan's theme based birthday parties, the latter still can't forget making a fool of himself at one such bash.

Hrithik and Karan took to Twitter to wish Abhishek on his birthday Sunday to share the childhood memories.

To which Karan responded, saying, "@iHrithik @juniorbachchan...yes and I came as superman when there was NO fancy dress theme!! AB never let's me forget how idiotic I looked!!"

Hrithik futher tweeted @kjohar25 @juniorbachchan: "And we have pictures to prove it!! Haha, you were always ahead of times even then!"

Preeti Jhangiani is so full of life that she didn't have to pretend to play the role in "Yeh Hai Mumbai", says director Sneh Tulli.

"Preeti is playing a bubbly character, which is not very different from her real life character. She is so sweet and well-behaved that even during breaks she used to ask me if anything was required or if she could go to her vanity," said Tulli.

Tully added: "Preeti in her real life is always full of life and very bubbly, so while shooting she didn't had to pretend."

The actress, who made her Bollywood debut with Yash Raj's "Mohabbatein", is believed to keep the atmosphere on the sets very delightful.

"As soon as Preeti shows up on the sets, the atmosphere on the sets, and cast and crew light up, there is smile on everyone's face and the environment becomes very relaxed," said a source.

Mandana Karimi and Radhika Apte come out in support of ...
29 minutes ago