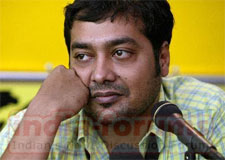 'It just makes the filmmaker angry and forces him to retaliate,' Kashyap told IANS.

He admits 'No Smoking', a dark drama about a chain smoker, isn't an easy film to ingest.

'I know it isn't a film that audiences will take to immediately. But if it's assessed properly and honestly it would help to put the work in perspective for audiences.'

In Rome, the John Abraham starrer has been heartily received.

'The Italian reviews have been favourable. We got a standing ovation and a lot of compliments. I suppose Europe appreciates an attempt to do something new on screen far more than India. Hopefully, our country too would come around some day,' said Kashyap.