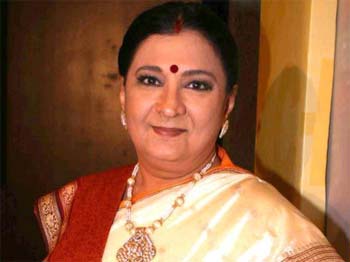 The actress will portray Kaushalya Bua of Harishankar Prasad. She will be seen as a woman with old beliefs, blunt, strict and unpredictable.

She still strongly thinks that if a woman is coming into the family after marriage, she has to bring a lot with her to the family.

Television actress Delnaz Irani, who is playing a foodie friend of Mona Singh in "Kya Huaa Tera Vaada", was down with fever but she continued to shoot without any fuss.

The actress is making a come back on small screen after a long time with the Sony's show and she is sparing no effort to give her 100 percent to it.

"Delnaz was not well and was even down with fever but instead of taking leave she was headstrong and went for shooting without any complains," said a source from the sets.

Actor Piyush Sachdev, seen as a police officer in "Hum Ne Li Hai...Shapath", was left in pain after he his knee got dislocated while shooting.

"It was great to see how professionally Piyush was preparing for the scene," said a source. "He was all set to perform despite the pain that he was experiencing due to his injury. His dedication comes out clearly in the sequence," the source added.

sanw 8 years ago great artist Bharti! I still remember her as Mrs Wagale

shanti05 8 years ago Thanks for the article, I love to watch Jhilmil in Meri Maa she is a sweet girl, and the show touches your heart seeing these street kids..
Delnaz get well soon and see you back with Mona in KHTV
Shapat also another amazing show and Piyush is doing a good job

'Ishq Mein Marjawan 2' Actor Muohit Joshi To Debut as a ...
12 minutes ago

Fukrey 3 Team Kick-starts their Work ahead of Shooting; ...
39 minutes ago