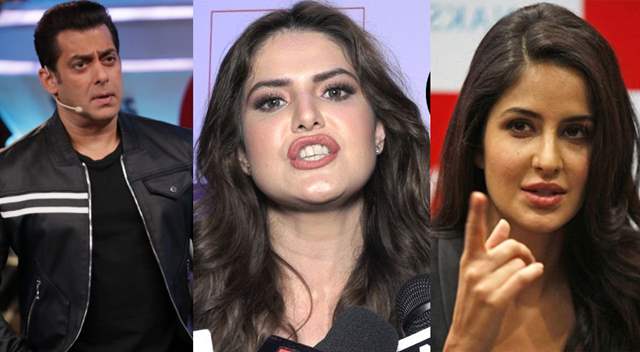 Bollywood actress Zareen Khan made her Bollywood debut opposite Salman Khan in Veer. Ever since she entered the film industry, she faced comparisons and is called Salman’s good friend Katrina Kaif's look alike. But time and again Zareen has expressed her disappointment revealing that the comparison has not led her anywhere.

Now during her latest interview with Navbharat Times, Zareen Khan once again reacted to being called Katrina Kaif’s look alike. The actress said that the comparison between her and Katrina Kaif got her career spoiled.

She told the Hindi portal,

I came to know that I am Katrina Kaif’s look-alike after stepping into the industry. Before that people used to tell me that I look like my mother. It became something different in life, that people started saying that Zareen Khan is the look-life of Katrina Kaif. I think it was the people who made my Katrina look-alike identity, it was made by the media only. At that time I did not get a chance to talk to the media, because the makers of the film were going to launch me differently.

Now media is media. The media has to know everything ahead of time and because of this, all my work got spoiled. The media told the news that the girl in the film Veer looks like Katrina Kaif and it spoiled all my work. This news has led to a feed in the audience that the girl in Veer looks like Katrina and thus people were not given a chance to create their own opinion about me.

She went on to add,

The news of Katrina Kaif's look-alikes did not work in my favour. Whoever comes in this film industry, they come to identify themselves and not want to live as someone's shadow. If I were outside this Bollywood industry, I would have been very happy to hear that I am Katrina Kaif’s look alike because she is very beautiful.

Back in September 2019, Zareena Khan had said on her comparison with Katrina Kaif,