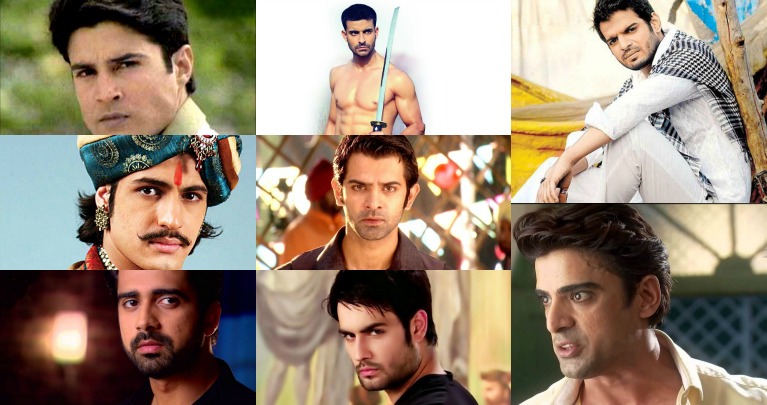 Nowadays Angry, edgy looks are in and these actors are just scrumptiously complicated. These boys might not be as angry as they portray, but seems like they have put in a lot of efforts to make their fans go head over heels. And it's surely working for these some of the enigmatic men of television industry.

He is shown the real chauvinist in Doli Armano ki. Samrat Singh Rathore the self-centred man is least bothered about females around him. This angry young man has done out-of-the-box acting and has portrayed a role which many actors hesitate to take up. He is known for his harsh language and deadly looks. No matter what, we still love Mohit Mallik as Samrat and he has some looks to die for.

Nowadays when we think about Emperor Akbar just one name click that is Rajat Tokas. Yes, you heard it right. This man has been doing mythological serials the day he started acting has created a good fan following. One can surely see the reflection of angry Akbar on Rajat's face.

It's been a while now that we haven't got an opportunity to see his angry man look which can make any woman drool.  But I guess the impact was very powerful and that's why we have him in our article on most angry man of Tellywood. Whether it was a role of cold vampire or a stubborn, self centred actor in Madhubala, he has definitely pulled off this look very well and we hope to see him back again on TV.

As we say Old is Gold' and this charming actor played role of angry man with ease. Arrogant, rich businessman Sujal from Kahiin toh hoga always believed that the world would bend to him. And again he is back on television with Reporters' and we can certainly see that old Sujal aura and spark in him. We can just say one thing- Don't just let it go...

He is far away from definition of tall, dark and handsome, but his sharp and edgy looks and attitude are something to die for. His rough and bristle attire in Ye Hai Mohabbatein are undoubtedly helping him to give that intense haughty look. Raman Bhalla's comic timing combine with his anger can leave anyone in splits. Now we know why Divyanka, Anita and his real life partner Ankita keep going GA-Ga over him.

Can you believe that Barun is actually very sweet and romantic man in real life?? Of course it would be little hard to believe, all thanks to his khadoos' nature in Iss Pyaar Ko Kya Naam Doon? Though Arnav Singh Raizaada radiates anger but his expressive eyes indeed blanket the heart with the feelings of love.

The passionate Gautam Rode might be soft-spoken and naive in real life, but his daring role in Mahakumbh is surely taking away all the attention. The actor actually went through a lot of training sessions at the gym and prepared himself to give those aggressive looks and it seems like he has been true to his character.

He plays male chauvinists in Iss Pyaar Ko Kya Naam Doon... Ek Baar Phir. The character Shlok played by Avinash required him to look very rough with his looks as well as in his attitude. And someone has said that it's good to be bad at times, and seems like it's working here.

suzane88 5 years ago Barun Sobti..his eyes ..instead of a thousand words ..When he is angry, he is unmatched

Eman_Massoud 5 years ago Arnav has a distinctive angry face in spite of personal Baron funny one ... which make him the best Indian actor :) my greetings to Barun Sobti

5 years ago barun sobti was the best angry young man on tv till now we still remember his dialoge and his famous WHAT THE!!

5 years ago Rajat Tokas the name is.enough.
He is.born to.rule.