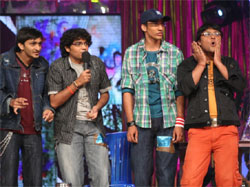 Ever wondered who a Beat Boxer is? Beat boxing is making percussion sounds with your mouth. This is one of the most fun styles of music and you can hear it only on Sony's Entertainment Ke Liye Kuch Bhi Karega from a group of four boys who play mouth and body percussion. They are students of Taufiq Qureshi.

Qureshi, an ace percussionist and an acclaimed composer happens to be tabla maestro Zakir Hussain's brother. Incidentally, he is also Farah Khan's college mate and she was delighted to see his students perform so brilliantly. The boys made it to the Finale with elan and will be seen in action tonight.

However according to our source, they unfortunately lost in the grand finale and the cash prize of 5 lakhs. Says the source, "The Beat boys were definitely one of a kind. They lost the grand finale but so what? They impressed Annu Malek so much that he promised to do a song with them using the same props. With this, the group has successfully bagged an entry into Bollywood!"

In the past too, similar surprises have cropped up on Entertainment Ke Liye Kuch Bhi Karega.  The dance group 'Fictitious' from Nalasopara got a break from Farah Khan, who was totally taken in by their moves.

Hope the beat boxers go a long way from here…

13 years ago Taufiq is really good at what he does & i was surprised that this halfbaked talent is from his school.
THey really need to brush up a lot.
If u see wat beatboxing is on youtube u would know what i'm talking about.
even if u r doing a western concept be at par,just dont do it because nobody is there to compete u in india....agar hai koi tow samne aa jao and show these guys wat beatboxing really is.