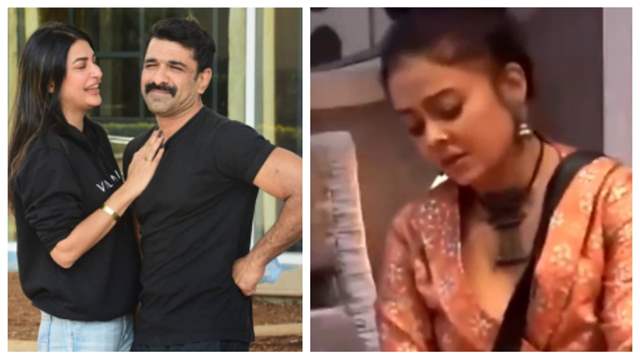 This past Weekend Ka Vaar was explosive as we know where host Salman Khan absolutely lost his cool and went on to slam the housemates for their wrongdoings.

Now, in a chat with ETimes TV, Pavitra Punia who is currently dating Khan talked about Bhattacharjee as Khan's proxy saying, "When the makers had roped in Devoleena as Eijaz's proxy, I knew she would be able to do justice to Eijaz's position. Since my brother is a big fan of Bigg Boss, I have more knowledge of the game because of him as he keeps on telling me about the game. So, jab maine Devoleena ka season dekha tha, then also she was playing really well. However, she couldn't continue the game because of her back problem. She is quite active on social media platforms and would post several reviews about the contestants and I was sure she would know then how to play for Eijaz."

She added, "But if we watch the game show now, going by Eijaz's image, whatever she is doing is completely opposite of what Eijaz's image is. Eijaz has mostly been quiet and has not been violent the way she has been in the recent episode. Eijaz ne ghar ko kabhi bhi nuksaan nahi pahunchaya. But having said that, going by the tough competition inside the house as of now, I think she is giving really good content to be there in the house. Eventually content matters, which the audience and the makers love. I would love to see more of this side of Devolina as by doing all this tod-phod, she is going to be in the show, which means Eijaz is in the show. Whatever, she has done, it is like giving food for thought to the audience, about her next move. Eijaz is alive in the house and apne ko sirf utna hi matlab hai."

We wonder if the fans agree with Punia's take on the same.