View Profile
Balaji Telefilms' Bayttaab Dil Kee Tamanna Hain on Sony which is just over two months old has not been raking decent ratings for the channel ever since its launch, and the TRP's show no signs of improvement. 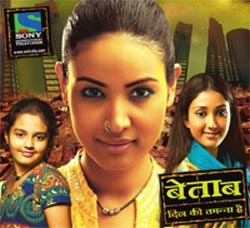 If the buzz is to be believed, the channel has put the show under the scanner and might face the kick if ratings don't improve.

According to our source, "Sony is focused on improving its overall viewership. The mega project of launching five new shows of Yashraj Films starting January 2010 is one step towards this aim. Bayttaab, presently is running at the prime time slot of 10 PM. If it doesn't return happening TRPs then definitely, some action will be taken. If the show is not chucked, it will be pushed to an earlier time-slot."

However, the lead of the show Sumana Das is pretty confident that the show will not wrap up so soon. She says, "No, the going is good. We haven't gotten any intimation that the show is under surveillance over the TRP issue. The show has just started. It's been only few months, no? And compared to other Sony shows, I think Bayttaab is doing pretty well."

However, Priyamvada Kant who plays Kanchan had a different story to tell. "Yes, I've been getting many such calls since it was announced that Yashraj is launching five new shows. Maybe the speculation is more about our show because it runs at prime time. But I just got to know, that a meeting was held where it was made clear that Bayttaab is not going off-air."

When we contacted our source in the production house, they asked us to get a word from the channel.

When contacted, Danish Khan, Marketing Head, Sony did accept that the ratings of Bayttaab is low. "Yes, the show is not giving us good ratings. But we are trying our best to improve the story line. As for the new shows of Yashraj Films, the date of launch and airing time will be notified by the year end. As of now, there are no plans of discontinuing Bayttaab".

Broken.Angel 11 years ago gosh! we warned them tht the shows will not get high trp's becoz they r seperating karan n kritika! they never cared! now let them regret! i wish the show ends soon!!

kulmona 11 years ago I love Aman Verma as Kunal Mehra. He is the best part of this show. He's damn sexy. Love the smile and the dimples.

nandini.v 11 years ago But there is no assurance whether YRF shows goes well or not & secondary i don't think that sony is making any
intelligent step to improve its viewership
Karan & Kritika are doing very good job but both shows are not good & karan kitika can't help it

Yuvika_15 11 years ago ekta should stop making re makes..she's done it b4 with kasturi and nw betaab too...it jus doesnt work....

Obsession1 11 years ago I hate both the ekta shows newly launched on Sony-Baytab & pyar ka.........
Earlier days atleast actors could act even though shows are crap ......Now UFF horrible cast as well

tanu111a 11 years ago i see this serial only 4 kk n frankly speaking betaab does not deserve such a hot guy.

Salmanisthebest 11 years ago they suffer becoz of female lead she is so horrible.........baate badi badi karti hai acting zero.......