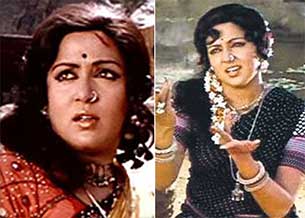 The conversion of 1975 film "Sholay" into 3D was not an easy task and some of the scenes posed problems. One such was when veteran actress Hema Malini, who plays the role of Basanti, is seen in a jungle.

The conversion has been done by filmmaker Keten Mehta's Maya Digital studios, which really had to struggle to convert a few scenes of the cult film.

"One of the most complicated frames from the film is where Hemaji is standing in a jungle," Mehta, who has made films like "Maya Memsaab" and "Mangal Pandey: The Rising", said in a statement.

"When we speak about depth and 3D, each individual portion is a separate layer, with its own depth. From her nose, to the hair, to the flexed hand, to each and every tree, to every leaf of each tree become a separate layer which had to be pulled out individually and then composited together to form a 3D frame with the right depth," Mehta added.

The 3D version of the cult film, that also features veteran actors Amitabh Bachchan and Dharmendra, will hit the screens Friday.

Disha Salian did not dial 100 before her death, says Mumbai ...
3 minutes ago

Nishant Malkani: I may not agree with everything Kangana ...
26 minutes ago

What was Ranveer Singh doing at YRF Studio? Close Source ...
33 minutes ago

Rupal Patel feels 'it will be wrong to say Saath Nibhana ...
59 minutes ago