Anjum Farooqi, who plays the role of Gauri on Colors' "Balika Vadhu", said she feels great to be associated with such a show, as it celebrated its 1,000th episode Monday.

"I feel great to be associated with 'Balika Vadhu'. 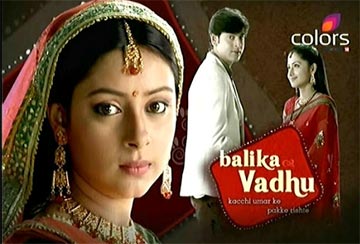 It is such a privilege to be associated with a cult show like this. I could never imagine that I would be part of such a show," she said.

The entire cast of "Balika Vadhu" with the exception of Surekha Sikri, who plays the role of Dadisa in the show, was present at the event where Laxmi Sargara, a victim of child marriage, was also felicitated.

Married when she was a year old, Sargara has now legally annulled her marriage.

Reminiscing about her days on the sets of "Balika Vadhu", Anjum told IANS about the fights which she and her co star, Shashank Vyas, have all the time.

"Shashank and I still fight on the sets many times. While pretending to fight during our scenes, we sometimes start fighting in reality as well. Our tempers are so high at that time, that we fight even if the other person makes a silly mistake," she said.

Anjum plays the role of Gauri, who is Jagdish's wife on the show. Her character was introduced much later into the show.

"I am really glad that the audience has accepted my character. I was very reluctant to take on this role. The audience knew and loved Anandi and Jagdish and this was a challenge for me," she said.

"I instantly wanted to be a part of it": Annup Sonii on reuniting with ...

Shashank Vyas opens up on being a good actor, quality content and OTT

Siddharth255 8 years ago First of all Anjum Farooqi plays the character of "Gauri" not "Gehna". Second, Neha Marda is not a part of the show now...

Last and not at all least... Gauri is Jagdish wife... Gehna is his Taiji...

+ 4
8 years ago Who has written is absurd article?

8 years ago Funny The show's lead Pratusha aka Anandi is not tagged in the article. And Anjum is not playing Gehna, She is Gauri.

Atleast proof read the article before publishing, if you are not watching the show. And Neha Marda is not in the show cast anymore.

+ 5
8 years ago Anjum plays the role of Gauri and not Gehna.. Anyway, Congrats to BV team for completing 1000 episodes..!!

+ 2
8 years ago yes there is a problem with this article in identifying characters with their real names! anyways thanks