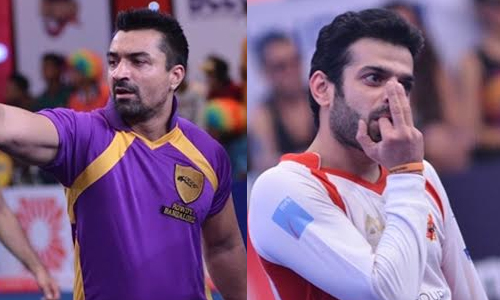 The current heartthrob of television, Karan Patel who is seen in the popular show Yeh Hai Mohabbatein is usually known for his cool attitude and Bindass nature! The actor was at his natural best while playing the matches for Sony Entertainment Television's Box Cricket League.

During one of the matches, Karan's team Jaipur Raj Joshiley was playing against Bigg Boss fame Ajaz Khan's team Rowdy Bangalore. Ajaz is quite infamously for grabbing the eyeballs with his over-the-top stunts and comments.

During the match as well, Ajaz kept on talking and would not stop at anything, irritating everyone around him. Not able to take his chattering anymore, Karan Patel was overheard saying that he desperately needs someone to get him a fevistick so that he can shut Ajaz's mouth with it! Well, we would really like to see him do that!

6 years ago Karan Patel love u as RKB.
Keep rocking!!!!

6 years ago Karan Patel is really a rockstar!!!
love u a lot!!

6 years ago lol even when u r angry Karan Patel..u r lovable :)

karanRKB1 6 years ago Karan Patel hahaha superbb u are !!! love u !!